I spent a fair bit of last weekend cleaning and tidying the house as it had got in a real state recently.  Whilst my elder daughter was out at a choir rehearsal I finished off the job of tidying up that she had started in her bedroom, and took the opportunity to photograph her rag dolls and the patchwork cushion I had made for her some time ago. 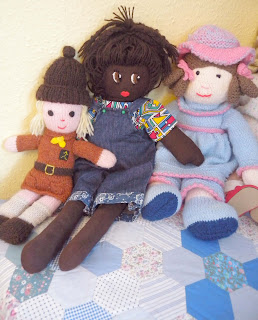 Brownie Guide, Trudy and Betty
The Brownie was knitted by a colleague of mine for her daughter some years ago, but was passed to my elder girl when she became a Brownie Guide.  My step mother brought Trudy to us - she is a South African rag doll and her clothes are made from denim trimmed with the Moravian blue and white indigo print cloth which was made into dresses by English missionaries in the 19th century for Xhosa women to wear -  it is called "Chwe-Chwe" and was absorbed into Xhosa culture in time.  Trudy's shirt is a print of the patterns found on traditional mud huts in the Eastern Cape.  Betty was a 'guess the name of the doll' prize for my girls at a church fete a couple of years ago (they guessed Elizabeth, it was the closest guess). 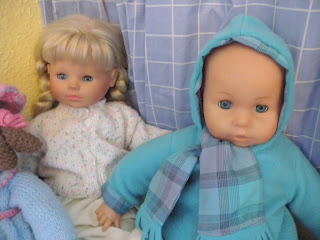 Charlotte and Thomas
Charlotte is a Zapf creations doll (West Germany), she is soft bodied and quite chunky compared to the Gotz girls, though she is about the same height.  She is a toddler doll.  She was given to my elder daughter when aged 3 for Christmas and is wearing a cardigan I knitted for her which matched one her owner possessed.  Thomas is a baby doll from John Lewis which was given to my big girl just before her little sister was born nearly 6 years ago. 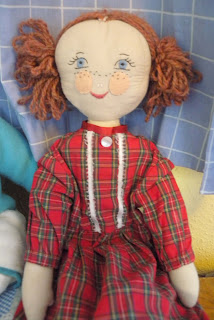 Madeleine the rag doll
We love Bagpuss, and I made this Madeleine for my big girl when she was 2 1/2.  I don't think she had seen Bagpuss though at the time, the doll acquired the name later.  Madeleine is made from a pattern I cut out of the newspaper in 1975.  In fact I was lucky enough to have two copies of the paper, which meant that when I finally made up the doll from the pattern more than 30 years later, I was able to cut out the pattern without having to trace it. 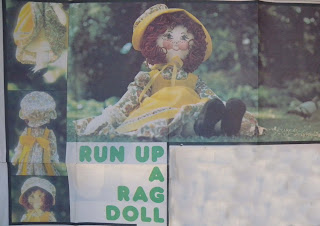 The doll in the newspaper pattern 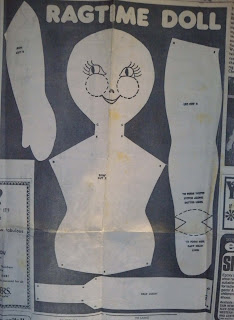 The uncut version of the pattern 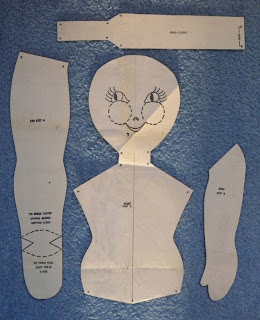 The cut version of the pattern
I made the cushion cover from hexagonal patchwork pieces of cloth that was left over from various dresses - cloth from the rag bag.  I had made my daughter a log cabin patterned duvet cover from the same selection of material, and it is still a favourite, more than 10 years later. 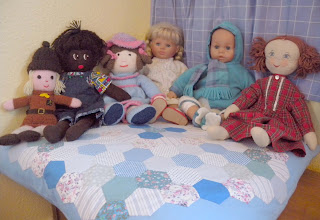 A lovely collection. I specially like the rag dolls.

Thank you. We're very fond of these rag dolls.

In this day of commercialism it is so refreshing to see 4 of 6 dollies handcrafted! I made my daughter's first doll 35 years ago...I think I will find it in the closet and gift it to her for Christmas once again! Hugs to you for a delightful blog! Flo

Any idea where I can buy a Madeleine rag doll for my grandaughter? Gramps.

I'm sorry, I have no idea where to buy Madeleine. I took much pleasure in making my own version, but I don't know of any produced as part of the Bagpuss merchandise produced in the past 10 years - they only seem to have made Bagpuss toys. I've found this pattern for a lavender Madeleine http://www.smallfilms.co.uk/bagpuss/maddy.htm on the smallfilms website.