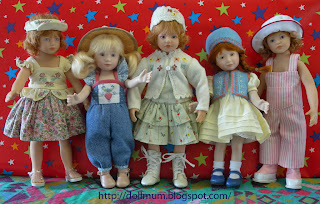 The past 3 years have held their own emotional difficulties in my life, and apart from my immediate family and friends, my dolls have been a great comfort, a hobby I can retreat to and indulge in when other things become too much.  With a full time job, other commitments and of course my family, I don't have much time to indulge, but I have spent several hours in the past 2 years exploring and learning about dolls online and have discovered some beautiful (but completely unobtainable due to price) dolls out there.  However 3 small dolls caught my eye during this time, and last year I finally succumbed and bought my first Heidi Plusczok doll.  I spotted 8 1/2" Patsi (the 25th anniversary version - 2005 http://www.heidiplusczok.com/seiten/archive_2005_1.html) and kept going back to her.  Something about the delicate knitting of her hat and cardigan, gorgeous flower sprinkled dress and sweet pensive little face framed by soft red curls really got to me.  I managed to source one from a doll seller in the USA for a good price (I spent several evenings comparing prices) and bought her. 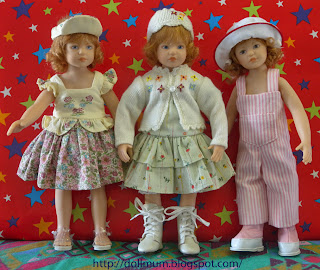 In the following months I also discovered that there were 2 other versions of Patsi, this time all vinyl bodies (anniversary Patsi has a cloth covered torso with vinyl limbs and head), and in due course I managed to purchase both Patsi in Florida (2006 http://www.heidiplusczok.com/seiten/archive_2006_1.html) and Patsi in California (2007 http://www.heidiplusczok.com/seiten/archive_2007_1.html), both for very reduced prices, from a doll seller in the USA.  Shipping them over to the UK obviously added to the cost and this did make me pause a bit.  There are slight differences in the way the dolls faces have been painted, the first 2 Patsi dolls have blue eyes (though painted differently) and Patsi in California has brown eyes, though all three have the red curls.  Each of them comes with a complete set of outfits and shoes in a special box).  They are very pretty, the outfits and shoes are Boneka.

Whilst looking for Patsi dolls I came across the small dolls of Heather Maciak, and instantly fell for Lexie and Jenny.  However, like the Patsi girls, these 8" playmates are mainly available in the USA and Canada, the biggest market for dolls in the west.  On ebay I discovered a Lexie doll being sold by someone in Germany, and after carefully checking the feedback on the seller and the description and photos of the doll, I decided to buy her earlier this year.  Lexie is no disappointment, she is a love of a little doll, a real cheeky character and the red hair adds to this (well I live with a cheeky, strong willed red head and at least a small doll doesn't answer back!).  A few months later I found a Jenny doll on ebay, this time in the USA, she wasn't in her original outfit but did come with her original box (she should be elfin Jenny but came with the 'playtime' outfit with no shoes), whereas Lexie didn't have her original box (she is 'all dressed up Lexie').  Heather Maciak has now stopped producing Jenny and Lexie, and there is a Yahoo group which is dedicated to them.  They don't come up on ebay very often, so I feel lucky to have acquired them.  They are porcelain, so are heavier than the vinyl Patsi girls. 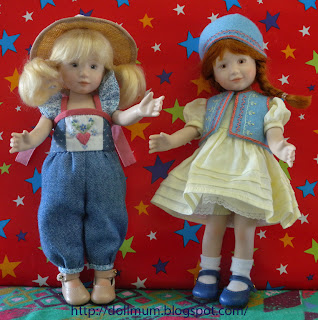 Jenny in Playtime outfit, Lexie 'All dressed up'

As I've mentioned before on this blog, I've been doing a photography course, and yesterday I felt ready to try some miniature doll portraits.  The photos shown here are the result and I'm pleased with them.  I lit them from both sides (one side was natural light from the window, with the curtains pulled across a bit, the other side was a piece of kitchen foil which reflected the natural light onto their other side to even out the shadows).  Jenny has borrowed a pair of shoes and a hat from one of the Patsi girls.  There are plenty of outfits to share between them all, though I have bought a couple of sewing and knitting books for dolls of this size (if I can ever allow myself the time for this!). 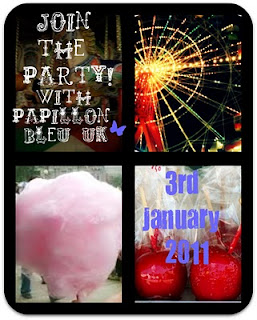 Postscript:  two of these girls feature in some photos I've sent to Papillon Bleu for her fairground themed birthday party - you'll have to wait until she publishes them on her blog in January to see what they are doing.
Posted by DollMum at 23:58 5 comments:

At long last, a promise I made on this blog several months ago has finally come to pass!  As explained in my previous posting, I'm busy doing a photography course at the moment (in between everything else!) in the hope that my doll photography will improve. Today I felt suitably confident to try photographing my elder daughter's dollshouse and contents, which I've been wanting to do for ages, but after taking some really awful photos of my Triang last year, I was very aware of my shortcomings with a camera and miniatures.

Welcome to every child's dream shop - Mrs Harvey's cakes and toys.  Mrs Harvey lives above the shop, and does a lot of her own baking.  She has two grandchildren who often come to visit her (hence the train set in her sitting/bedroom), and today they are downstairs watching two other children choose some cakes. 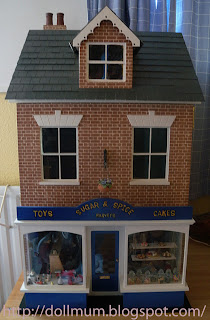 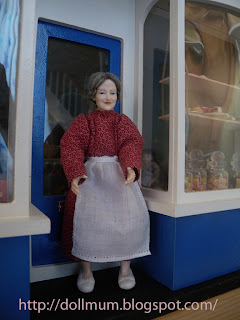 My husband built this house from a kit soon after our younger daughter was born, for our elder girl, who was 7 1/2 when her sister arrived.  He did a beautiful job of hiding the lighting wiring in grooves, so there are no ridges in the wall or ceiling papers, the switches are on the back of the house behind the staircase.  I did the painting and decorating and painstakingly sanded and laid the floor tiles in the shop (next time it will be squared paper, not real tiles!).  I also rebuilt the shelving unit in the shop which was bought ready built but needed to be adjusted to fit the space under the stairs, and I'm quite pleased with the result.

My daughter and I had great fun finding miniature toys at various fairs we attended, and we made most of the cakes from fimo including the hot cross buns which have real poppy seeds for the raisins.  Mrs Harvey and her grandchildren are all Heidi Ott dolls, which came without clothes, and I dressed them (even doing smocking on the little girl's dress, and knitting the jumper worn by the boy).  The two visiting children were gifts from my godmother and I haven't changed their clothes, even though they seem a little old fashioned in their attire compared to the others (the kitchen is fairly modern, so we think this shop is probably quite recent, despite some old fashioned toys). 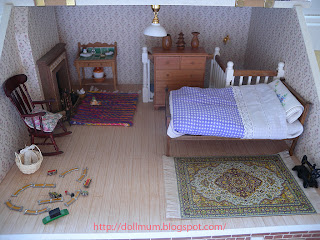 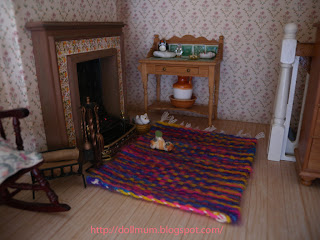 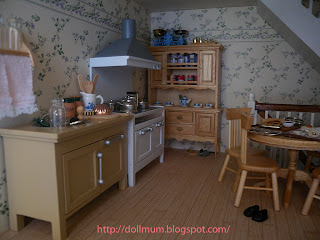 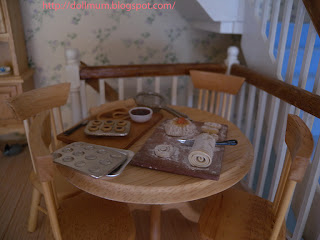 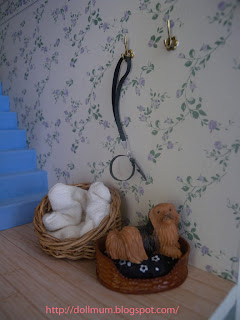 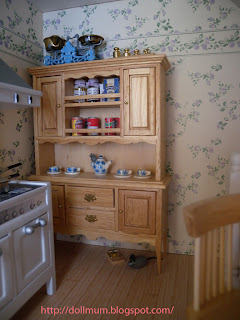 The dresser, including the mini tea set
with mouse on the teapot made by Fay of Cape Town 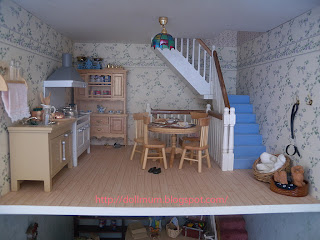 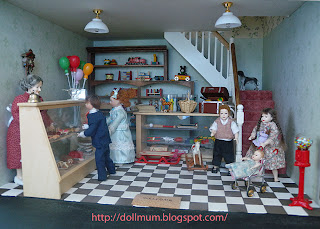 The cake and toy shop 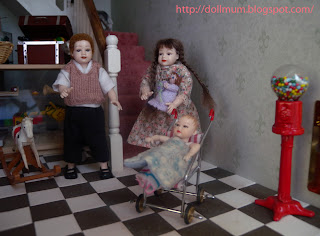 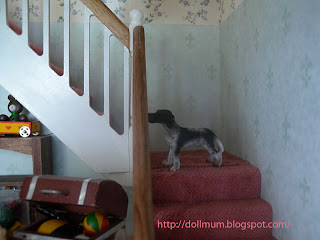 Dog on the stairs 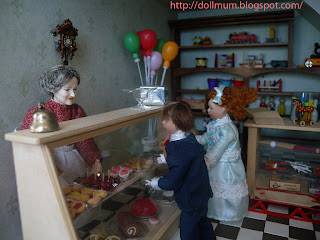 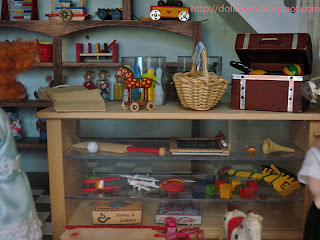 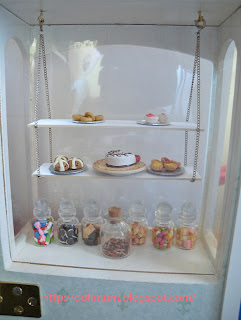 Cake Shop window from inside 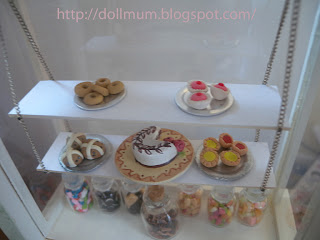 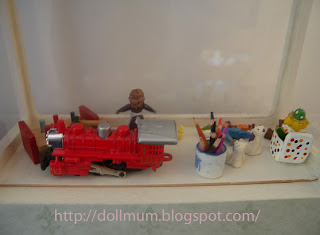 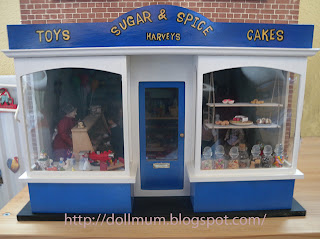 Shop windows from outside 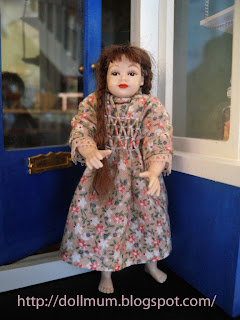 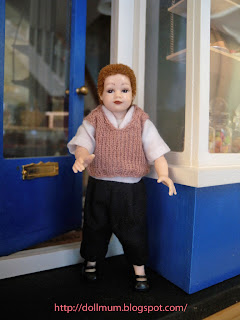 Mrs Harvey's grandchildren outside the shop
They have now all been packed away carefully in a plastic box, as we are hoping that we'll be moving house soon (though you never can tell with these things).  It is quite sad seeing the dolls house empty and knowing that it is likely to stay that way for the next couple of months while we move and get settled in our new home before we can bring all the dolls houses out and set them up again.
Posted by DollMum at 01:17 7 comments: