This evening I took a break from sewing Samantha's pop-star outfit.  This was from necessity because the redcurrants were fully ripe and today my husband and daughters stripped the bush clean as requested while I was at work.  When I weighed the bowlful before removing them from stalks and discarding the shrivelled ones, it came to 1.8kg, after my younger daughter and I spent over 90 minutes steadily de-stalking them, it came to just over 1.6kg.  I wasn't sure that I had enough sugar to turn the whole lot into jelly in one go, so I did 1kg worth this evening, which after straining out the pips gave me just over 2 jars worth (one of which will be a gift for a friend this weekend).  My elder girl who stayed up for the jelly making had a taste of the scraping from the saucepan and wanted more, so that is a good sign.

It seems like such a lot of work for a couple of jars (though there will be more tomorrow from the remainder which are ready for cooking), but as we stripped the berries from their stalks I explained (between younger girl's silly jokes and elder girl's comments as she sorted photos from her music trip) that jams, preserves and jellies were made from fruit as a way of preserving them for the winter months, so that people got a supply of vitamin C even when there wasn't any fresh fruit about.  Modern international trade, airfreight and people travelling relatively easily around the world has given us the impression we can have any type of fruit at any time of the year, but not so very long ago seasonal was the only way to eat, and during the war, preserving produce was vital during rationing.  The nicest thing about this evening was that we spent time together, even though the task was monotonous, the company was good.

It is now entirely too late to start sewing, especially as I've had a full, busy day at work, I've just heard the jelly jar lids pop as they cool (they've sealed nicely) so I shall go to bed shortly after a job well done.
Posted by DollMum at 22:45 2 comments: 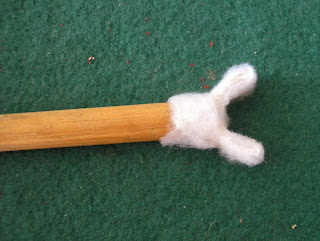 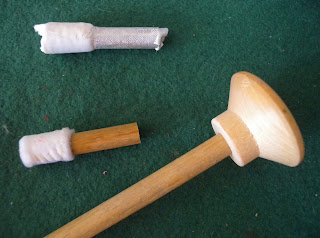 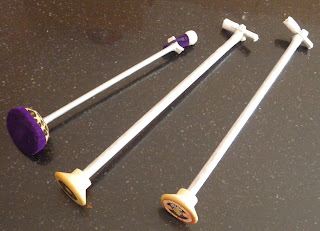 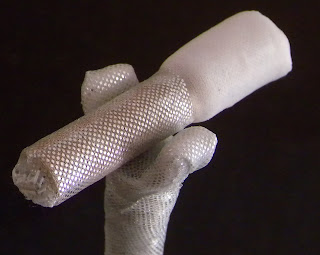 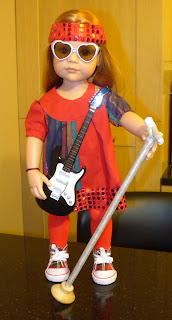 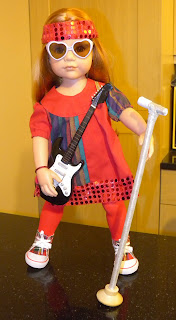 As explained in my previous post, I've been sewing my verson of the Gotz 'Hannah the Rockstar' outfit.  The outfit is now finished, the heartshaped sunglasses purchased and on her face, I've added a ribbon strap to the miniature guitar to help her hold it, and I think Harriet looks pretty cool.  Even my husband was impressed, and that is saying a lot (he tolerates the dolls as a fact of living with 3 doll mad females, shows occasional interest in the play dolls but is more interested in the dollshouses especially as he built one of them from a kit).

However I haven't yet made the microphone and its stand to complete the outfit.  This will require a couple of pieces of dowel, some wadding, and some silvery fabric to cover the dowel.  However since finishing the outfit on Saturday night, I've been busy cleaning and tidying my elder daughter's bedroom while she is away on her second school trip in 2 weeks (this time a whole week away playing her violin), so I've had no time to make the microphone and stand.  Hopefully I'll make a start on it tomorrow night.

I haven't taken photos of Harriet in her outfit because it doesn't seem complete without the microphone, so I shall tantalise you in the meantime with a description:  The dress is red with contrast material of purple, green, brown & red strips inlaid with shiny thread, the bottom of the dress has a band of red sequin material to match her sequin hairband, she wears red tights, the tartan plimsols, and the lilac heartshaped sunglasses.  The guitar is black.  With Harriet's auburn hair, this makes quite an arresting sight!

Welcome Princessclaire1000 to my blog - from your profile picture I'm guessing you are interested in American Girl dolls, but I can't find a blog link for you.
Posted by DollMum at 22:13 No comments:

As explained in my previous post, this time of year in our family is always very busy.  However the birthdays are over now, as are my daughter's music exams and I've at last managed to carve out a few evenings to start working on dolls clothes again.  I keep wanting to get the dollshouse on the go but get distracted by outfits for 50cm dolls instead!  The new Gotz catalogue is out, and my elder girl is particularly taken with 'Hannah the Rockstar' - she loves her outfit even though it is a deep rich pink (not my red head's favourite colour).  The outfit doesn't come separately, Gotz are clever at attracting people to buying more dolls, but as we've already got an extensive family of Gotz, Australian Girl and Euro girl dolls, I don't want to buy another blond Sarah/Hannah doll.  So I've decided to try and copy the outfit, though with different material.

I've got as far as sketching out the pattern based on a Joan Hind pattern for an A-line dress, though adapted to suit the pleats in the rockstar dress, and have just cut out the material, so am almost ready to start sewing.  I have also bought a real guitar (black plastic) which is very similar to the guitar that Hannah is holding (ebay again), it even has its own padded case.  Some months ago I bought some tartan plimsols which go with the two different materials I'm using for this dress.  All of this planning, material matching and considering is happening while my younger girl sleeps upstairs and my elder girl is away for a few days on a school trip, so neither of them know.

I'll post more as the dress progresses.  In the meantime, welcome 'all4dolls' to my blog.
Posted by DollMum at 21:31 1 comment: