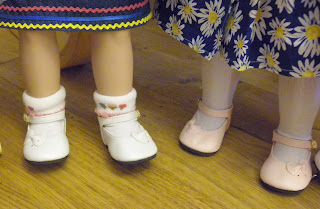 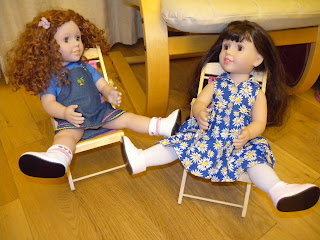 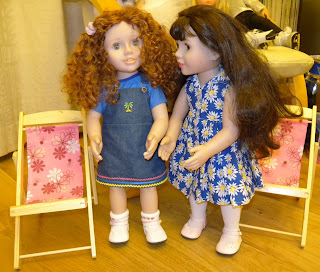 Matilda wears the dress and top I made,
Belle wears the 'Nellie Rose' dress
Posted by DollMum at 00:36 8 comments:

Too much to do!

I've been doing entirely too much recently, both at work and at home, so have had minimal time for the dollshouse and dolls blog.  I work full time in an education setting (I'm the main breadwinner), I participate in musical activities (2 choirs, one band with other time consuming related matters) and of course have my family to look after.  My husband helps with the children's after school stuff when I'm at work, and does some housework, but somehow a mother's work is never done, and I almost always have a pile of unalluring paperwork to get through when I'd far rather be fiddling around with miniatures or sewing clothes for the Gotz and Aussie dolls.

In the midst of all this recent crazy busy, I sewed an outfit for my younger daughter's best friend for her birthday.  They've known each other since babyhood, and despite going to different schools now, we still meet up regularly because they are pals, and us mums get along.  Little girls love dressing up, and this one loves dancing around in front of the TV pretending to be a cheerleader or ballerina or gymnast.

I sewed a red leotard out of jersey fabric (not stretch jersey, so I had to adjust the pattern to fit), a bolero top of red velour and a sparkly red sequin material skirt.  I've got the material to make a royal blue version for my little girl, who has blue eyes and strawberry blond hair, but haven't managed to get the sewing machine out since making the first outfit because of the birthday party and the 100 other things that have been happening since.  I'm pleased to say that this outfit went down a storm with my daughter's 6 year old friend, who wrote a thank you note for her 'red clothes'. 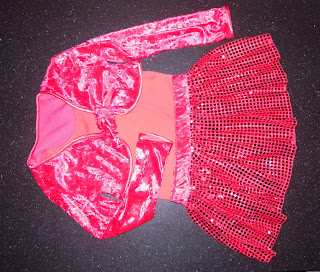 And my dollshouse sits invitingly near my computer, oh how I itch to get stuck into working on it again.
Posted by DollMum at 22:07 2 comments:

Email ThisBlogThis!Share to TwitterShare to FacebookShare to Pinterest
Labels: Sewing

Welcome, and dollshouse is home again!

Two followers in one day!  Wow.  I've got 50 people following this blog - I'm amazed and pleased - thank you everyone.  The two newest followers are:

Núria blogs in Spanish and is creating a shabby chic house, though also uses playmobil figures to good effect.  She blogs at http://mininuris.blogspot.com/

Traci at Random Aspects blog http://random-aspects.blogspot.com/ also has an etsy page http://www.etsy.com/shop/goodlifeminis.  She has some very interesting projects (such as her Greek house), and is just about to start another one (restoring a colonial farmhouse)

Welcome to my blog Núria and Traci.

I'm especially pleased today because we collected my half-built Westville Greenleaf dollshouse from storage this afternoon, and although I won't be able to spare the time to do much to it within the next month, I can at least now feast my eyes on it again, dream and plan ;-)  For the moment we've got our full size house off the market, as we work out whether our finances can stand the strain of a mortgage (we currently own our home outright, which is a comfortable position to be in).  If we do think we can afford something better, we may put the house back on the market in the Spring, but in the meantime there is no point paying for storage, so we're bringing our clutter home again!
Posted by DollMum at 23:22 No comments:

Despite the fact that I've been outrageously busy for the past 2 weeks and haven't managed to do any serious blogging, this little blog of mine has acquired 4 more followers:

Daphne L Williams has two doll related blogs.  She has been making porcelain dolls for 10 years and clothes them http://finallyknowboneka.blogspot.com/ and http://porcelainvspolymerclay.blogspot.com/ - they are well worth a look as she does beautiful work.

My Reallity owns 19 dollshouses!!! http://myrealitty.blogspot.com/ of all different kinds and styles.  I like the photos of the houses all around the inside of the full size home, what an amazing collection.

Amica doesn't appear to have a blog but judging from the profile picture, loves dogs.

Welcome everyone to my blog.

P.S. We did some full size baking this afternoon, and my elder daughter decorated ginger biscuits and cupcakes. 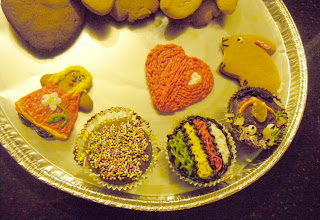 Email ThisBlogThis!Share to TwitterShare to FacebookShare to Pinterest
Labels: Welcome

I mentioned some weeks ago that we had collected some items from the storage so that I could spend a weekend making miniatures.  One of the items we brought home that day was the roombox.  It seems appropriate to talk about it now, as we are almost upon the 6th anniversary of constructing this little scene.

I was about to give birth to our second daughter, and we had just bought the kit of the dollshouse that is now my elder daughter's dollshouse.  We were very conscious of the fact that she had been an only child for over 7 years, and that adjusting to a new sibling was going to be difficult.  So for Christmas we had bought her a doll's pushchair and her Godmother gave her the baby doll Thomas.  These had gone down well.  However at school that term her class was exploring WW2 from the perspective of children - what it felt like to be an evacuee, dig for victory and live during those times.  Her class were making and drawing things to illustrate their understanding of the topic.  I wanted to explore it further with her, so we bought a roombox kit  (dollshouse emporium), my husband put it together for us, and we collected items together, including buying two cheap dollshouse emporium dolls which I redressed, and sundry other items including a pet food can!

The internet was a great source of information for things like how to construct an Anderson shelter and learn about rationing, especially the BBC schools website.  She and I came up with the idea of two evacuees arriving in an English country village with their gas masks and their few belongings, to a world of fresh vegetables on your doorstep and sheep in the fields nearby.  I sketched out the background scenery and my daughter coloured it all in and drew the sheep.

My younger daughter arrived (nearly 2 weeks late), then a few days later it was February half term!  Any sensible mother would have postponed further work on the room box.  Not me (well now at least I've admitted I'm not sensible!).  My abiding memory of constructing the room box is sitting at the dining room table with the baby wrapped up in the Kari-me cloth sling, lumps of Fimo and tools, rolling miniature tomatoes, cauliflowers and carrots on a board on the table with my elder daughter.  I was doing it one handed until I had the sling! (I've still got the sling, I will not part with it - for my children's children, if I'm lucky).  I was very tired from disturbed nights and trying to keep everyone happy and this was my way of spending time with my elder daughter so she wouldn't feel left out.

The path is sand on glue, the vegetable plot is tea leaves and sand on glue! We were very proud of  the Anderson shelter - my daughter had a ripple cardboard kit used for giving ordinary paper or card a ripple effect.  The main body of the shelter is the pet food can, cut open and trimmed to size, the front and back of the shelter is rippled card coloured with a pencil to make it look like corrogated iron.

The tomato plants are made from coloured wire and green card (my first attempt at making miniature plants).  The carrots were the best fun for my daughter to make, and we trimmed the tops with bits from my miniature Christmas tree. 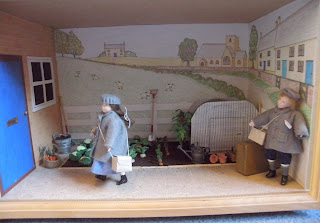 Arriving in the country 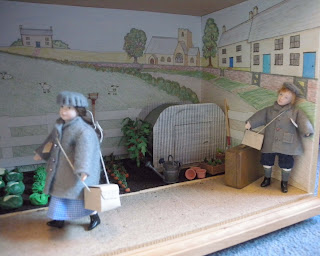 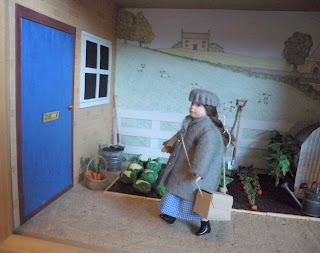 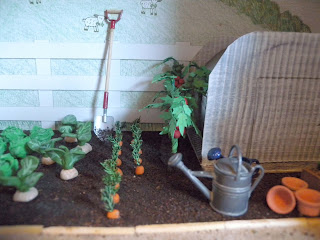 Close up of the garden 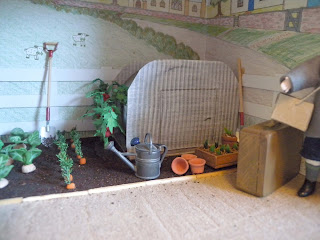 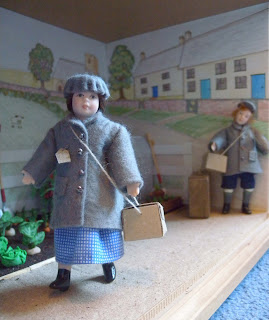 Gas mask and child label on her coat 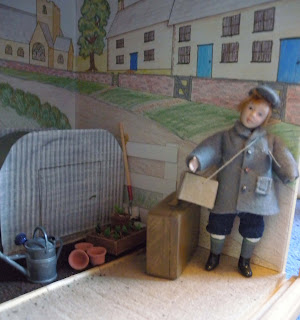 I made their coats from a pattern from Sue Atkinson's 'Making and dressing dolls house dolls'
Posted by DollMum at 09:27 9 comments: