Have you guessed yet?

Sorry, since posting at the end of January, February flew by with so much to do in our new home, my younger daughter's birthday and my full-time job, so blogging and the dolls have had little of my attention.  But I did mention a new addition to the skating doll family in the 26th January post, and I have managed to photograph him when I took some photos of the Greenleaf Westville house (which will appear here soon).

Ever since the first 6 Kidz 'n Catz dolls came out in 2009, I've had my eye on this little lad.  Maybe it was because he reminds me of my elder nephew at a certain age, maybe it was because of the jointed elbows and knees, or his beautiful clothes, including a sweatshirt featuring the Eiffel tower.  Even after seeing the more recent boys in the KnC range on-line, he is still my favourite of the boys.  I finally purchased him in a 10% off sale from Bambolina in about September last year, but kept him hidden from the girls until after our move.  I also got lucky on ebay about 6 weeks before our house move, as I managed to purchase the KnC ice skating outfit for £10 (it normally retails at £36), and although it smelled slightly smoky (brand new), 2 days in the sealed bag with a washing powder tablet soon removed the smell.  This meant that his first outing was on the second night of the new Dancing on Ice series, when we'd only been in the house for 5 days and were still surrounded by boxes of books etc.  I introduced him as my doll - they can play with him, but he lives with Susie and Anna in my room with Panda, Bruin and my husband's bear in the doll corner of the bedroom (my doll cabinet is now hanging on the wall above the chest of drawers where the bigger dolls sit, and my Westville house is on its table nearby).

Jakob sitting in his skates
I have kept his KnC name of Jakob.  His original trousers don't really go very well with the KnC skating outfit, so he now wears Peter's spare black skating leggings with his burnt orange skates.  I haven't had time to make him any other clothes, and will not be buying the KnC outfits as they are much more expensive than the Gotz clothes and I'm capable of sewing them myself.  His feet are a little smaller than the Gotz dolls, but he can wear their shoes with socks.

Jakob
Jakob is 18" high, so is shorter than the Gotz girls, Peter and Ron, though is about the same height as Harry and Hermoine.  His jointed arms and legs do make him a little easier to dress than the Gotz girls, though the elastic in them can pull into funny poses, which means reposing him to look more natural.  His hair is a wig rather than rooted, but looks very natural, his face is beautifully sculpted and tinted.  The girls like him because he is flexible so can really look like he is doing skating moves. 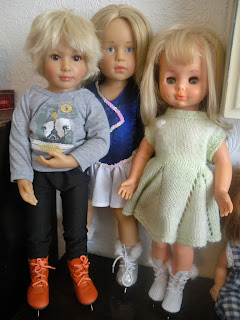 Jakob with Anna and Susie in their skates
Posted by DollMum at 21:33 3 comments: