And so to the last morning of the Sasha Doll Festival.  We all met for Brunch in the downstairs room at 9:00 am.  My girl and I sat with several people we'd not spent time with before, so met more new friendly people, some of whom had travelled all the way from Australia for the festival! 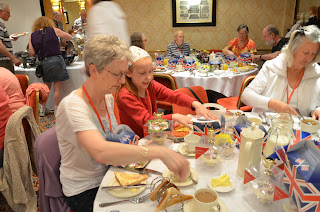 Our table gifts were a wonderful completion to the Olympic themed set - little hooded tracksuits with London 2012 embroidered on them, a Union flag tote bag which contained a medal, a cup and a little Union flag on a cocktail stick, perfect for sport mad Sasha's to wave!  Christine and Chris Meatyard were the table hosts at our table and had provided a beautiful cake stands with little cakes for the dolls - so they can have a Jubilee tea party.  Nicholas James insisted on wearing his new white tracksuit straight away, while the red one is ready for when one of the girls get sporty (there was also a blue tracksuit). 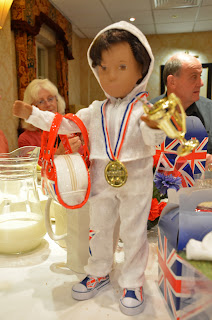 Dawn did some thank you speeches and handed out little gifts to those who had been instrumental in helping her make the festival so successful.  Heidi talked about next year's festival, which will be back in the USA, and thanked Dawn for all she had done this year.

Then it was time to draw the helper raffle. Once again the children helped, this time bringing the prizes and the pots of tickets down from the Library where each pot was tipped into a bowl and a ticket selected for the winner.  My girl was thrilled to win two dresses (one of them she drew her own ticket, much to the enjoyment of everyone, Boo had done the same and their reactions were fun to watch).
Then big tension while Anna Doggart drew the three special raffle prizes.


First was Amelia, the Cora girl with her red, white and blue American ensemble 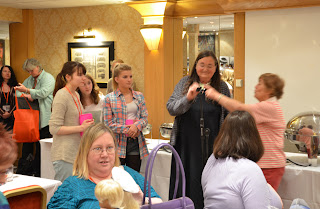 Lucky Laura - her face was a picture! 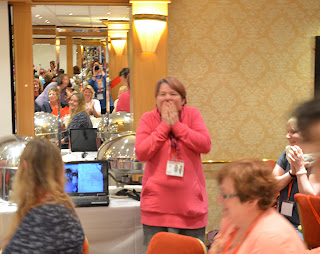 Then Anna drew the ticket for William going to school 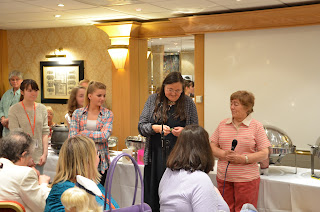 He was won by Annette, so will be travelling to Germany 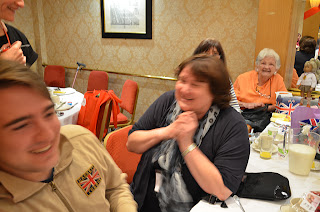 Last of all Anna drew the ticket for the baby with her layout. 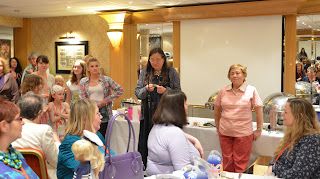 Joyce was amazed to win. 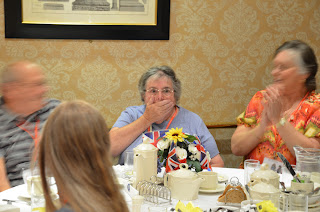 My girl was disappointed that she hadn't won the baby herself, but the chances were small (we'd bought the minimum number of tickets).

Then all of a sudden it was time to say goodbye to all our new Sasha friends.  We lingered for a little while, took some final photos and phoned for our lift (the caravan was all packed and almost ready to go).  While we were in the lobby having a final chat with Fran and Boo while we awaited our lift, the winner of many helper raffle items came up to us and asked if we would accept her giving my girl and Boo each one of her raffle prizes, she had so many and would have asked them to put them back but the raffle was going too fast for her to request this, so she gave my girl a little blue gingham dress with matching panties and hair bow on a clip.  What a lovely thing to do - thank you Diane S.  This particular dress has become Miranda's 'school dress' and is a big hit.
I still have some photos to take of items we bought at the sales, and the dresses won in the raffle, but this is the end of my account of our first Sasha Doll Festival.  I would like to thank everyone who helped organise it - what a great event and I hope the next one is equally as enjoyable for the lucky people who are able to attend.
Posted by DollMum at 23:49 No comments: 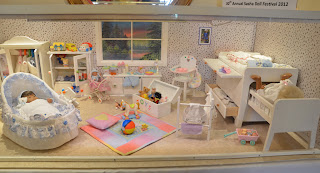 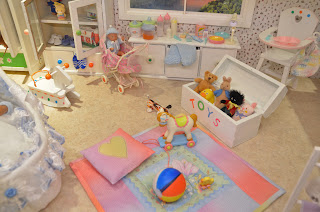 On Saturday morning we were treated to two very interesting talks.  The first was by a slightly nervous Marie, who showed us some brilliant slides of studio dolls and discussed in detail the history of Sasha studio dolls in particular.  Her slides showed the different faces which Sasha used, some of them more regularly than others.  She then unveiled her collection of Studio dolls in glass cases which we were able to photograph, what a glorious surprise to see them up close. 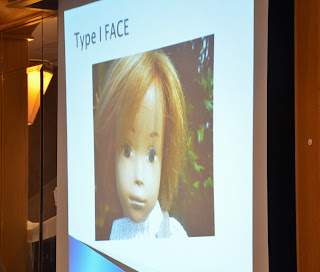 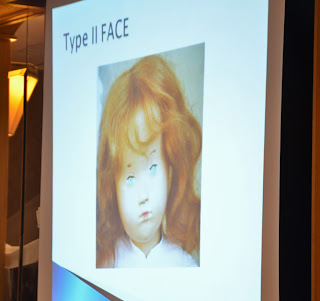 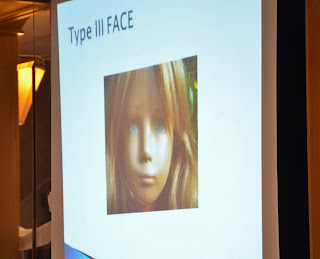 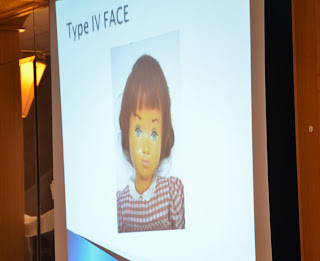 After the tea break Brenda Walton, the manager of the Trendon Factory, gave us a fascinating talk about the production and also showed us a BBC produced film of little Jenny watching her Gregor doll being made.  We were all pleased to know that Jenny still lives in the area near the factory and still has her Gregor.  It was quite entertaining when the hair was rooted into the doll's head by machine - the gasps and laughs around the room were quite audible, especially as we had learned all about the tedious task of rerooting the previous day - so fast and easy compared to the restoration process now.

Before lunch, my daughter and I took the opportunity to look at the amazing Special Raffle prizes and the Helper Raffle.  We, like everyone else, were quite overwhelmed by the sight of the three prizes.  My girl wanted to win the baby, I liked the blond school boy and the American invasion Cora in equal measure, their collections of clothes and accessories were truly incredible. 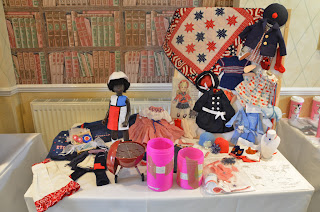 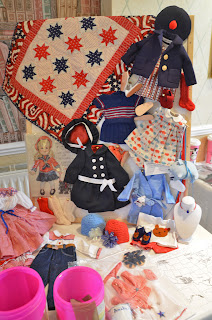 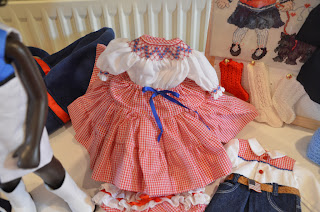 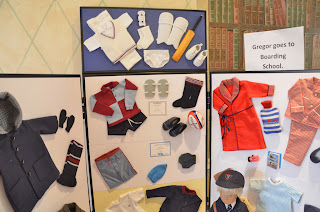 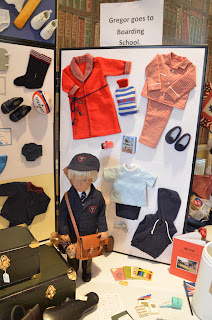 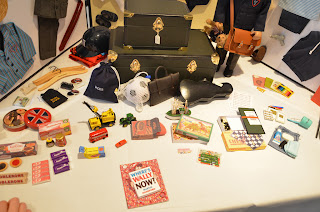 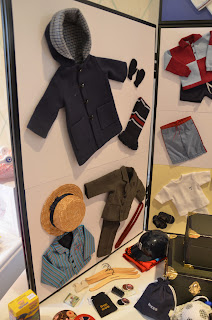 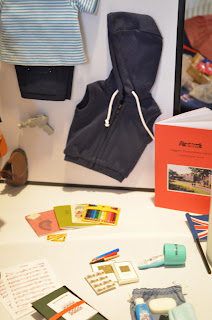 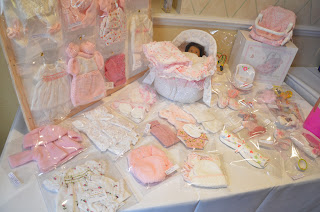 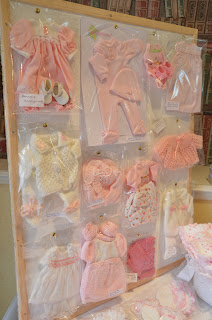 On our way to lunch I got a chance to take a photo of the amazing themed display in the lobby with the cabinet doors open, so no glass reflections or door dividing the scene. 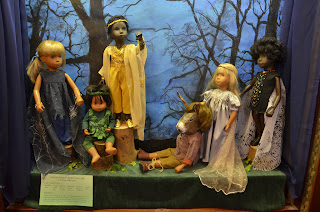 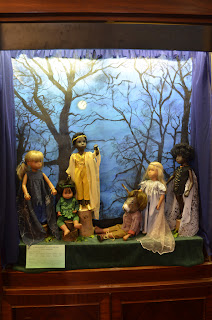 Children's Fund Auction next, but that will be in my next post.