Raffle prize for the Dolly Jolly

In preparation for the Dolly Jolly event which Janet has organised in May, I've been doing some sewing recently, using fabric I won on the raffle at a Sasha Celebration Weekend a few years ago: a pile of patterned fat quarters in shades of blue and yellow, plus some plain fabric. One piece of floral fabric was used to make an Easter bonnet with a matching outfit (including using the Ted Menton pinafore dress pattern), in the challenge posed by Gael S in one of the Sasha Facebook groups. I finished the bonnet and the outfit just in time for Easter day. We were in York for the whole weekend, so the photos I took of Florence with her Easter treats were in the little patio garden of the AirBnB we were staying in at the time.

The other part of the sewing I hadn't quite finished before we drove to York on Maundy Thursday, and required my sewing machine plus the iron, so I left it at home to finish when I returned. It is a double sided Sasha doll sized picnic rug.

The food pattern fabric used as the centre piece on each side was quite a large piece of Mary Engelbreit fabric which I had bought a few years ago, three patterns of which I used to make a dress for my younger daughter when she was 10. It seemed right to use this fourth piece in a picnic rug.

I had been gathering items for this raffle prize for a few weeks - two hamper baskets, the miniature tea set, the Sasha sized tumbling tower blocks and I raided our Sasha toy collection for the remaining items of fun games to play on a picnic (frisbee, bat and ball, foam football). The larger hamper basket had no lining, so I lined it with some of the food pattern fabric, the smaller basket had red and white check lining but I ripped that out and replaced it with pale blue and white check lining instead, to match the picnic rug.

Florence, her shoes and socks are NOT included in the raffle prize.

Everything in the raffle prize fits neatly inside the larger basket. This will be a special raffle prize at the Dolly Jolly event during May 2022 (in England).

International travel - that gift and privilege that many of us have been unable to enjoy for 2 years due to the global pandemic. Despite having covid-19 at the beginning of February, a month later, still recovering from its effects, I was fortunate enough to travel to South Africa with my cousin to visit my elderly aunt and see my sister, another cousin and families again. In my hand luggage I carried 4 dolls. Reuben and Melanie, two of our Sasha family, came with all their Shweshwe clothes, though only one outfit each actually got photographed. I had intended dressing them in their Basuto and Xhosa outfits (which I made for the 2017 Sasha Celebration Weekend) while in the Eastern Cape. Joy and Kolisi (two of my Kruselings) came too. But only the Sasha dolls managed to get out and about with me for some photos on a couple of occasions. My energy levels for doll photography was vastly reduced as I recovered from the virus.

While in Cape Town, my cousin and I visited The Waterfront. One of the stalls in the big craft building featured slot together dolls houses made by a local small business. Ikhaya crafts make eco-friendly toys to promote play, I was interested to note that they had two ranges - what looked like a 1:12th scale range (for 7-13cm size dolls) and a Barbie doll size range. The Kruselings are between the two sizes, though possibly some of the Barbie furniture might have suited them, but I didn't have them with me at the time to try them for size. The dolls houses, their furniture and accessories were very well designed and nicely made (laser cut).


My aunt lives in the Eastern Cape Town of Makhanda/Makana (Grahamstown), so after spending two and half days with my sister, cousin and niece in the Karoo at a game reserve (where the warm, dry salty air helped my lungs) then a few days in Cape Town with my sister; my cousin and I flew to Port Elizabeth (Gqeberha), hired a car and drove to Makhanda to stay for several days.

It was only on our last day there that I did some doll photography. The previous day I had visited the History Building of the Albany Museum as I had vivid memories of discovering its displays, which had included playthings from the past, as a child. Reuben and Melanie came in my bag as I had hoped to photograph them looking at the displays, but photography in the museum was forbidden, so I spent time reading the information and looking but not taking photos.

The first room had a fascinating display about the last 200 years of the cultural influences on the area, showing the experiences of the indigenous populations and the European immigrants, including the 1820 settlers. During the apartheid era in the 1980s, when I had last visited the museum, the focus had very much been on upholding the legacy of the 1820 settlers and all they had done to build the town. This newer display was more balanced as it revealed additional perspectives on the evolution of the Eastern Cape meeting of peoples and cultures though it looked tired and some of the labelling was hard to read (it needs refreshing, but funds are limited).

There was also a gallery about the character and story of Makhanda/Makana the Xhosa prophet (1780-1819), a gallery with some of the artefacts and furniture of local families (but far fewer toys and playthings than I remembered seeing in gallery above that space back in the 1980s), an Art gallery upstairs and a fascinating display about Rev James Arthur Calata (1895-1983) who had done much for musical education (he founded a choir and composed music for it) and was also the first black canon at Grahamstown Cathedral. 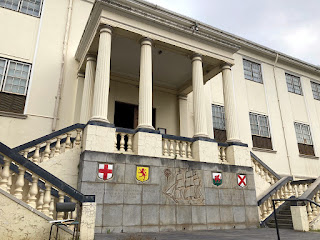 As we were leaving Makhanda, Reuben and Melanie had a brief visit to the Monument, which was built to commemorate the 1820 settlers but is also the venue which hosts the famous National Arts Festival events each year. It contains theatres, an atrium, conference facilities and stands on the hill above Rhodes University and the Botanical Gardens. I remember the Monument when it was very new.

The Monument's position provides fabulous views of the town below and this is what Reuben and Melanie saw.

Our next destination was an AirBnB house on the banks of the Sunday's River. We arrived to enjoy the sunset on the river and I left the following morning for my flight to Cape Town. Melanie and Reuben explored the cactus garden at the back of the house, which had been dramatically lit in the evening and also looked wonderful in the morning light. I was able to photograph the nearly full moon, with its Southern Hemisphere face (much more symmetrical than its Northern Hemisphere face).


I took the doll sized Shakespeare Dream Coat I've been making as my contribution to the Susanna Lewis raffle doll prize for the 2022 Sasha Festival to work on while in South Africa, I did manage to do a bit of the embroidery while in SA though not a lot.

I bought some more Shweshwe fabric from my favourite little shop Mnandi Textiles in Observatory, Cape Town. The colours and patterns are such fun, maybe some of the doll family will gain more shweshwe outfits sometime soon, though only once my contribution for the Dolly Jolly raffle and the Shakespeare Dream Coat are complete.