I've had little time for blogging in the past 2 weeks, as every night before Christmas Day I've been sewing more Barbie clothes and another ice skating outfit for my cousin's daughter's third Gotz doll she acquired for her birthday some months ago.  Christmas Eve was spent frantically wrapping my own two daughter's presents whilst fighting off extreme tiredness, and I wasn't able to actually finish the skating outfit until the evening of Christmas Day!

Christmas afternoon my daughters eventually unwrapped their new Austalian Girl dolls, the first to arrive in England I believe.  We always spread presents out over the day, and had gone to Church in the morning, so the large boxes waited beneath the tree until after we'd had Christmas dinner, been for a walk with the dog and eaten Christmas pudding!  It prolongs the excitement to spread the presents over the day.  Welcome Belle and Matilda - my girls are happy to have you.  My younger daughter also got two Gotz deck chairs, a swimming costume and a paddling pool with accessories, so these were used to make the new girls from Australia feel at home despite the fact we still had the previous Monday's snow on the ground outside. 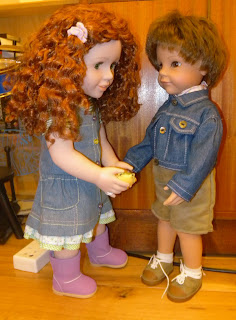 Peter is transfixed by Matilda's beautiful hair and forgets to tie his shoe laces! 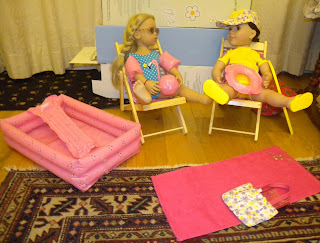 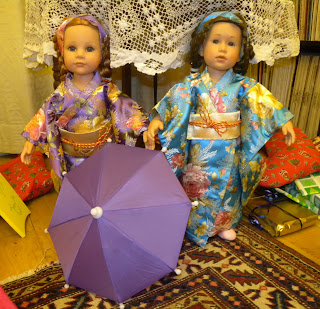 Harriet and Samantha showing off their new Kimonos from Hong Kong 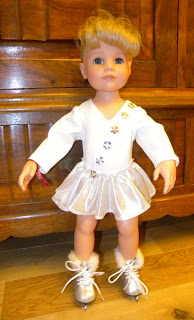 
On Boxing day we took the handmade Barbie clothes etc amongst other presents to my cousin's house and later that afternoon had the pleasure of watching them being unwrapped.  The long blue dress and matching felt handbag was a definite hit and went on one of her many Barbies straight away.  Prince Charming who had arrived for her on Christmas day was given some casual clothes (Bermuda shorts and Tshirt) and there were another couple of casual sets for her Barbies (she has about 10) too. 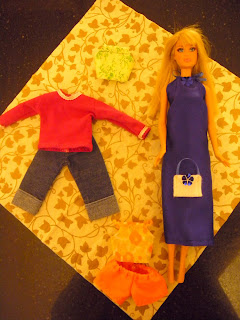 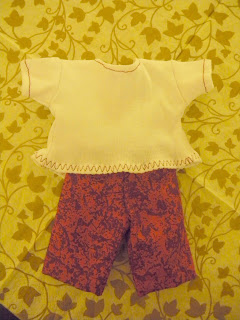 She was absolutely delighted with the new skating dress, silver skates, silver shoes for off the ice and knitted bag I had found at a sale and changed Lacey into the dress immediately.  We had taken ALL our Gotz girls and boy, my girls insisted that even my Anna doll had to be there, so we ended up with 8 Gotz dolls and 2 Australian Girl dolls whilst with my cousin!  The men in the household were remarkably understanding. 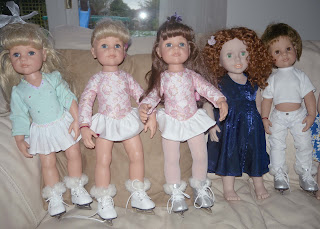 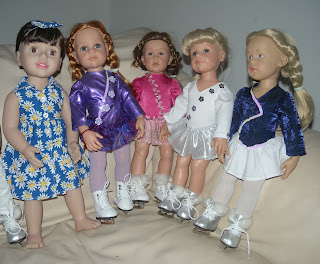 
* Sarah, Mia and Lacey are my cousin's daughter's dolls
And now it is New Year's Eve, we are watching DVDs, eating popcorn and lazing at home whilst waiting for midnight, so I'm taking the opportunity to blog at the same time to wish every one a very happy continued Christmas tide (not over until the 5th January) and peaceful and prosperous 2010.
Posted by DollMum at 23:43

What a gorgeous line up! THe outfits are all fabulous!
Happy 2010!
Mercedes

Whata nice idea to spread the gifts through the day. And so many lovely dolls and outifts, you have been very prolific!
We don't end Christmas until after the 6th of January, so a belated Merry Christmas to you and best wishes for 2010!

Happy New Year from the dolls of my house to all the dolls of your house!
All the best to you and your family!
X

Thank you Mercedes, Pubdoll and Papillon Bleu. I'm catching up with everyone's blogs bit by bit now (I've got about 2 weeks worth to work through!) having been so busy with sewing.
And this evening I've sewn skating leggings for Peter, but still need to make his skating top.

You got great collection :)
I came from flickr, and have a question - tried google but failed.. Maybe You can help?
Will American Girl shoes&pants..and other fashions fit Gotz Sarah? Will the fit be normal or baggy or too tight?
Thanks in advance!

Hi Nadia,
All the American Girl shoes that we've got fit Gotz Sarah beautifully. However Sarah is slimmer in body than either American Girl or Australian Girl, so Sarah's jeans won't fit the cloth bodied dolls (Sarah is all vinyl). I believe that American Girl clothes mostly fit the Sarah dolls, though sometimes they are a bit baggy around the waist, but this usually isn't a problem. I don't know where you are based, but in the UK good suppliers of clothes are My doll boutique http://www.mydollboutique.co.uk/ (she buys in AG clothes), Nellie Rose http://www.nellierose.co.uk/ (she makes clothes for Gotz Sarah and AG), Bambolina http://www.bambolina.co.uk/ and KR Dolls and Bears http://www.krbearsanddolls.com/.

Thank You so much for detailed answer! :D It helped ~a lot~ :)