In the left corner of the middle shelf sits Matilda with Judith on her lap. Matilda is a Pippa type doll with long blond (rather frizzled) hair. She originally belonged to one of my school friends but we did a swap. She got her name from the book 'The Ship that flew' by Hilda Lewis, which was a favourite of mine at the time (and years later I bought a copy as the version I read when a child was a school library book). The Matilda character in the book was a girl from the middle ages whom the four children with the magical ship visited when they went back in time, and she had long hair. I think it was this and the shape of her face that prompted me to give her that name. 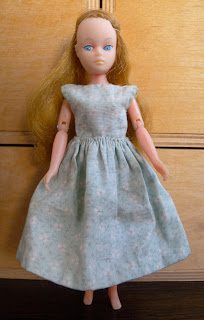 She is wearing a dress I made from material that was left over from a dress made for me when my father remarried. I've still got the full size dress!

Judith is very small, just under 2 inches tall (about 48mm). When I was about 7 or 8 I had private Art lessons from the mother of a pupil at school, who ran the group lessons in her garage which she had turned into a wonderful studio. We did some great projects in those lessons, including making puppets for a show which was put on in her living room for all the parents at the end of term. I can remember two of those shows, the first was done with glove puppets, and was Jonah Man Jazz, and the second was a made up story about two children going in a rocket to the Moon with their mouse that got enlarged by a ray gun. They had a grandmother who got left behind. I was given the task of making the two children, the grandmother and the giant mouse. These were all marionnettes, and I think I've still got some of them. One day my Art teacher sent me from the studio to fetch something from her living room (probably some material or a source book, I can't recall) and I spotted little Judith lying on the dining room table. She had no clothes on and was the dearest little doll I had ever seen at that point, though not in great condition even then. I took her back to the studio along with whatever it was I had to fetch, and showed her to my Art teacher who told me I could keep her as I had been doing such a good job with my puppets. 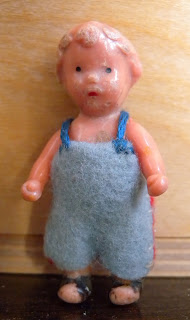 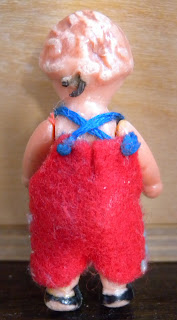 I made the little felt dungarees for Judith. She has been through the wars though, as at one stage her leg was broken, so I glued it back with epoxy. She also has a rather unsightly piece of wire sticking out of the back of her head, which I left alone rather than try to saw it off. Earlier this week my elder daughter expressed an interest in looking at her, and while I was removing the dungarees, both her arms fell off as the elastic band had turned black and disintegrated. I did a careful repair by using twisted doubled over cotton thread from the hooks on her arms. Fortunately they are not too loose. Her legs are not jointed. I used to take her to school in a little box in my blazer pocket and was teased mercilessly by some of the other children for doing so. To me she was a little mascott, something to help get me through the school day.
Posted by DollMum at 21:40