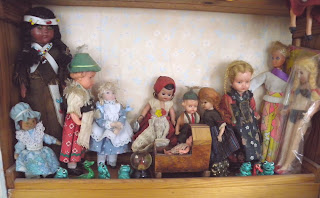 Here are the bottom shelf residents in my doll display cabinet. Quite a mixed collection.

On the left is my Canadian Indian boy. My father's sister lived in Canada for the latter half of her life, and when I was three or four she sent my sister and I Canadian Dolls for Christmas. It was my first introduction to indigenous peoples of another country (apart from my own), and especially confusing in that the dolls were introduced to us as 'Indian' when India was in a different continent from the Americas. However this in fact was a great way of introducing world exploration history and terminology to two curious little girls. My sister got a squaw doll all dressed up in a lovely fur coat and I seem to remember with a papoose, I got the boy with plaits (braids in the USA). When later we started reading the Laura Ingalls Wilder 'Little house' books, those dolls certainly helped us to visualise the peoples she met on her journeys.

We weren't allowed to use the dolls in everyday play, nor did we ever take their clothes off as little children normally do, as it was explained that they were dolls for display rather than play. But we did hold them quite a lot over the years. Despite this, he is in remarkably good condition, not spoiled at all, though his leather clothes are a little faded, as I discovered when I lifted the flap of his top.

Back view, showing the quiver for his arrows
(no arrows though - he came without them)

I cannot find any markings on his visible skin to tell me what make of doll he is, however on Janiesdolls.com I've found this article about a very similar doll (different outfit and hands) which is called a Ginny doll from the Far Away Land series. Sadly mine does not have a box or an identification tag and I wouldn't part with him anyway, but it would be nice to confirm when dolls dressed like him were made, if he is indeed a Ginny. He has jointed arms and head, but his legs don't move, so he stands firmly upright.

In front of my Canadian/American Indian boy is a little bead and pipe cleaner doll dressed in blue. She came from a festival stall and I'm pretty sure is based on the Jean Greenhowe doll on the see-saw in Making Miniature Toys & Dolls, a book I was given when I was seventeen. I didn't make her, but did make similar dolls at one stage, though actually before I got that book, so must have borrowed library books for instructions to make my first pipe cleaner dolls. Such dolls are quite satisfying to make, as they are posable, and it was in making them that I developed skills some of which I later used when making my jointed hand carved dolls, around the time I was given that book. 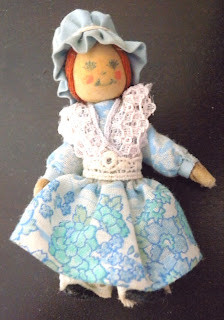 Little Bead and Pipecleaner girl
Posted by DollMum at 20:13