Results from a weekend of miniatures

It was lovely making miniatures again this weekend. Sunday afternoon my daughter and I dashed into Hobbycraft (always a risky business going in there because there is so much variety of craftware to buy) and bought some Humbrol Enamel paints.

My girl wanted to paint the figures as well, so I gave her the challenge of the little doll's dress whilst I continued working on the Cuckoo clock. In my previous posting I uploaded a photo of the work in progress - the clock needed more colour but not too much as I didn't want it to look too bright or tacky. I printed out photos from the web of 6 different but colourful clocks to give me a guide on colour balance. None of them were anything like the same design, but they did help.

I made a start on the clown in between coats of paint drying on the clock and cooking Roast Lamb for dinner. My daughter did a pretty good job of the doll's dress and her face skin painting but then had other things to do (like getting ready for school for Monday). So I eventually finished the girl, including painting her features which I did at the same time as the clown's face. 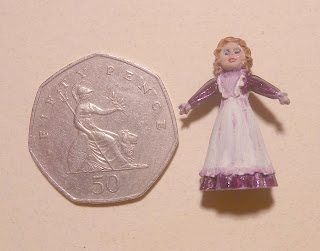 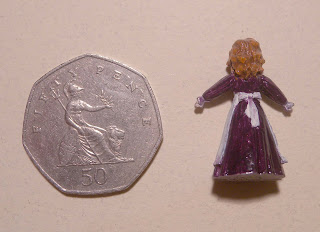 Back view of the painted doll 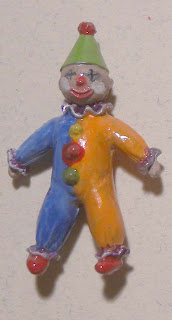 I also glued the fire iron stand base and top to the upright, touched up paint a bit and the set was complete.

This evening, after work and choir practice I have fitted the weights, chain and pendulum on the clock, so my daughter will get a surprise in the morning. 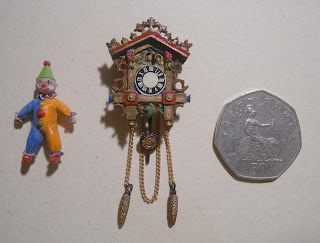 The finished clown and Cuckoo Clock 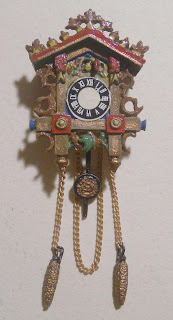 Close up of the Clock

You've both done a great job with all the painting but that cuckoo clock is magnificent!
Mercedes

Wow!
You've both done a fantastic job! I am impressed!

Thanks very much for your kind comments.

My daughter isn't happy with the clock face transfer. It was supposed to be a stick on transfer but wouldn't come off the backing so I carefully cut it out, however I've left too much border for her liking! I've told her 'tough' as it is glued on firmly now.

Apart from that she is very pleased with the clock, and has been working out which wall in the toy/cake shop will take it.