My Panda bear was given to me for my first Christmas.  He was very smart when new, and sported a lovely red bow tie and a growl box that really worked when tipped forward.  Panda joined in with lots of games and teddy bear picnics on the back lawn which resulted in him slowly becoming quite grubby and worn, so unfortunately he is no longer in pristine condition.  The picnics on the back lawn usually included all our dolls and teddies, and were held on my mother's travel rug, which had been on her bed when she worked in London during the 1960s.  I still have this rug which is well travelled but still in usable good condition, and it was given back to me by my step mother recently. 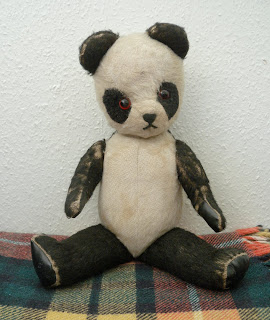 Some years ago I unstitched his back and repaired his growl box which had got filled with stuffing, but it isn't working again, so I think some surgery is required once more.  His label was removed when I was a baby so I don't know what make of bear he is and haven't gone in search of his maker identity yet. 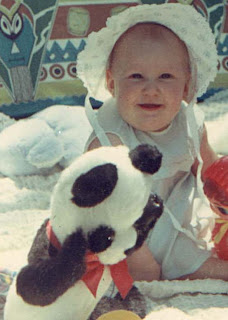 Me with Panda when we were both new! 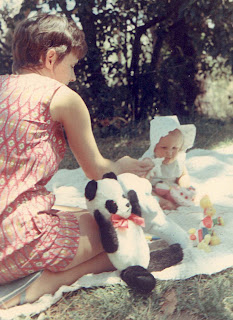 My mother had two teddy bears when she was a child.  One she gave to my sister and I as small children, he was called Bruno and we loved him loads, and were able to share him quite happily.  Unfortunately about 10 years ago one of my sister's dogs got hold of him and he was very badly mauled, so although she patched him up, he is in very bad shape.  However my mother's first teddy was not one we played with, because even when we visited her parents on those trips to the UK, and were allowed to play with the contents of her toy trunk, the bear was always removed first.  On her lone visit to the UK in 1981 my mother returned with the bear, as her parents were moving house, and she did not want to get rid of Bruin, he was clearly very cherished.  As a child she had made him a smart grey blanket coat and red hat, which was a master stroke for preservation of his body, because he has been protected from the worst excesses of child play and is in very good condition for a bear in his 60s. 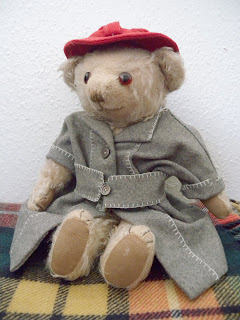 Bruin in his coat and hat

After my mother died, my sister inherited Bruno and I inherited Bruin.  He has always been kept on display since then, not locked away in a trunk or a cupboard, so needs dusting occasionally.  He doesn't have a label anymore.  Some years ago I did a bit of searching around, and finally concluded that he is probably a JK Farnell bear, and will have been made in 1943/1944.  Bruno was about a year younger, but was from a different English maker. 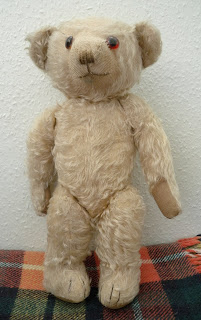 Bruin without his clothes, showing how good his fur is despite a long life

When I was about 4 I was given a soft toy Poodle dog which I adored.  Poodle has character.  He originally had no clothes, but his body got worn pretty quickly, so my mother gave him a 'dog tooth' coat.  His paws are of the same felt like material as his original torso, and unfortunately have suffered too, and at least two paws are safety pinned on! (sorry Poodle).  I did some awkward repairs when much younger (not a very good job), hence the safety pins.  I also re-sewed on one of his ears, which gives him a lopsided look from face on. 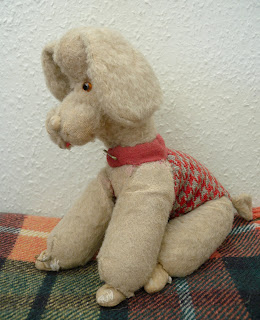 Poodle prefers to sit, though he can stand up -
probably hurts to stand up with those safety pins!


Poodle is all the more precious because I lost him once within the first year of having him.  We were visiting a garden centre one day, and somehow he got dropped and we went home without him.  I was distraught.  I can clearly remember that someone had put on the single record of 'Downtown' sung by Petula Clark and I sat miserably in an armchair listening, that song is now always associated with Poodle.  I can recall that at first my mother was cross with me for being careless, then when she realised how truly distressed I was, she phoned up the garden centre and by some miracle someone had found him and handed him in.  So while one parent rushed back to the garden centre to collect him the other stayed at home with us and soon I had Poodle again and was VERY careful after that with my toys when we took them on outings.  Even now if my younger daughter takes a toy away from the house I remind her not to loose it or any of its attachments! 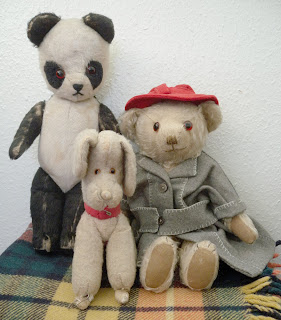 Panda, Poodle and Bruin as they are today,
sitting on my mother's vintage travel rug,
which she had in a bedsit in London,
brought on her travels, was used for family picnics
and now has a quiet retirement (still in very good condition)
as a display seat for my teddies.

So Panda needs surgery to repair his voice, Poodle needs foot and ear surgery and Panda needs a gentle surface wash to remove stains and a brand new red bow tie.
Posted by DollMum at 23:53

I cannot believe I missed this lovely post!
I love the pic of panda and you when "new".
Oh please join in the Xmas party!I am sure we will all have fun!

What a lovely panda! Now that we're thinking of books, do you know Ponder and William, by Barbara Softly? Another childhood favourite, though my sister's more than mine.

No, I don't know that book - so another one to follow up!