In 2008, after seeing the Sarah ballerina Gotz play doll owned by my cousin's daughter, I went searching on the web for a Gotz doll for my younger daughter, and discovered the Bambolina website http://www.bambolina.co.uk/. I ended up buying the Gotz Zauberwelt Ice Skating doll, in her lovely winter costume and fur lined boots rather than one of the Sarah dolls. Something about her naturalistic face appealed to me and I knew that ice skates would be popular with my little one. She was intended as a Christmas present - but I bought her in July so kept her hidden for 5 months!

I showed the doll in secret to her big sister, and the green eyed monster emerged. I could tell that she really liked the doll too and really wanted a doll with skates but didn't want to admit it. After all which modern day girl of 12 wants to admit to being interested in dolls when her peers might consider it childish. So I showed her photos of some of the Sarah dolls to try and gauge which one would suit her, and she was torn! I did not let on that I might get one for her. Eventually I bought the Sarah and her Dog 2008 (cream outfit with black boots) as this is quite a sophisticated outfit and the hair colour matched my elder daughter's hair.

In the meantime, I was really taken with the Gotz Anna doll, with her painted eyes. Her face is very similar to the Zauberwelt girls, but seems slightly narrower, and her skin tone is more yellow. Her outfit really appealed to me, so hints were dropped, and in the event Christmas came for all three of us! Even the grown up 'girl' got a doll (I said he was tolerant).

The Sarah doll was named Harriet, for the little red headed girl in White Boots by Noel Streatfeild. The dark haired Ice Skating doll was named Samantha - because she liked the name! 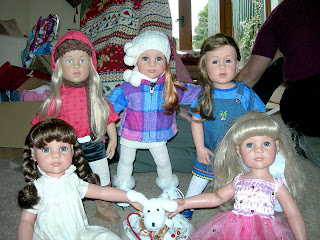 Anna, Harriet and Samantha with Mia and Sarah (cousin's daughter's dolls) on Christmas Day
Harriet is wearing the fleece I made to match my elder daughter's fleece, and has borrowed the skates from Samantha. Samantha is wearing a blue jumper set I made which is now dubbed her 'school' outfit. Mia was a Christmas doll too (special edition Sarah) and the fairy outfit that Sarah is wearing was our present to her.
Before Christmas, I got sewing in order to provide the dolls with clothes to wear apart from what they came in, and the additional outfits I had bought. However it was only after Christmas Day that the following outfits were made for the three dolls: 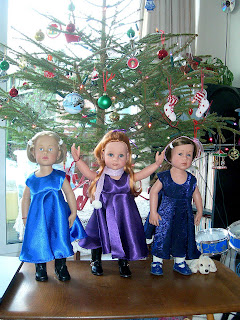 Anna, Harriet and Samantha in their Christmas party dresses (pattern from the Joan Hinds book 'Sew the Contemporary Wardrobe for 18-inch dolls' which is available from Amazon).
And this was just the start of it all!

Hello,
Your three dolls are beautiful. Your dresses look great too.
I have been desiring 'Sarah and her dog' but now I see the other two are also very lovely.

Many thanks - I actually prefer the Sisse Skille designed Ice Skating/Anna face rather than the Hildegard Gunzel designed Sarah doll face, but like both really.
'The Sarah and her dog' outfit from 2 years ago was a paisley jumper outfit, which Gotz have now issued in their clothing catalogue, I've given it to my elder daughter's 'Sarah' doll recently.
I'd like to get an Australian Girl doll as you have on your site, but the postage overseas makes the doll expensive.

Hello again,
I have been looking for the Ice Skating Doll here. So far I've found only the blonde, fringed Princess, also nice but pricey. Now I am checking the UK websites.
I know what you mean about the postage!

Belle - the Beach girl is my favourite, followed by Jasmine.
The dark haired ice skating Gotz 2008 is still available from KR Dolls and Bears. There is one blond limited edition fringed ice skating Sarah currently available on ebay but it is going for more than my girls paid for theirs.

I think Belle has nice hair for play (like the Emily doll). Jasmine has been very popular and is out of stock now. She was my daughter's favorite. I like Amy.

No luck with the Ice Skater. I really like that face and might opt for the Princess if she's still available later in the year.

I'm hoping to get my own "Harriet" next month though.

My elder daughter picked the name 'Harriet' because of the character from the Noel Streatfeild book 'White boots', but that doll didn't come with skates and the 2009 Gotz skates were silver. I finally opted to buy a pair of American Girl white skates (the Mia 2008 doll had them), and she got them for her 13th birthday - and was thrilled, as Harriet now has white boots.

I see that you are right about the dark haired ice skater no longer being available from KR Dolls & Bears, however the same doll is available at http://www.krbearsanddolls.com/GotzAnna.htm, though this year she has a fringe (and no skates).

Hi DollMum,
I've been admiring your dolls - again.
I am very pleased because I have acquired my very own "Samantha" (the 2007 version) who will live on my other blog.
Now I really must learn to get along better with my sewing machine, so I come here for inspiration!