Friday morning setting up the 'Dress a Sasha' started from 7:30 am.  More entries than had notified Dawn had arrived (about double the number expected), and there wasn't enough table space for everyone to have their 18 x 18 inches.  Some of the entries for the same section (there were 3 themes, with 2 categories in each theme) were split up and displayed in different areas of the room.  Some entries were placed on narrow windowsills in front of the mirrors decorating the room.
I found I was all fingers and thumbs when setting up my display (unusual for me) and was very lucky that Lisa Hartley was setting up alongside me (in a different section for the theme) and was kind enough to help me put the long boots (which she had made) onto Florence who was being Lady Celia Feinnes (Ride a Cock Horse) for the morning - thank you Lisa.  Some people arrived later and found they had no table space at all - the last to arrive set up her 'rock a bye baby' on a chair which was below the table level.  The Royal Family section was compacted into a smaller area than needed, which meant one entry was in front of another on the table, and two entries were so close that some people thought they were together. The Shakespeare sections had all fortunately been placed together and could be easily compared, they were all brilliant entries. The three themes were:
The two categories were:
My daughter entered the children's section, with a cat outfit on baby Mabel which I had made the previous weekend.  I had made the outfits for my entry.  Both of us used the English Nursery Rhyme theme.


Once the entries were assembled, the morning's programme started.  Dawn welcomed us all with an entertaining speech in which she somehow managed to bring in as many Shakespearian play titles as possible, to great applause.  She introduced Chris and Christine Meatyard who gave a very interesting illustrated talk on how they restore Sasha waifs, even the ones which seem beyond help, and as a result we all learned about the wonders of Milliput and boiling water!
This was followed by a tea break in which some people posted their voting slips for the 'Dress a Sasha' competition, I heard and observed several people confused by the jumbled up themes and categories.

This was followed by a good illustrated talk by Rosie Bloomfield in which she showed us step by step how to make a pair of Mary Jane shoes for a Sasha doll, she gave us photocopied plans and encouraged us to give it a try.

During her talk the 'Dress a Sasha' votes were counted, and chocolate medals placed with the winners.  Several people were surprised that they had missed the voting, the programme had indicated we could vote after the talk, but apparently the room had to be cleared by 1pm to allow hotel staff to reset it for the evening dinner, and unfortunately there would be no space to keep the displays up during the meal.
All the children's entries (there were four) were given medals for first place, they were all good and it was impossible to choose between them.  So my daughter was delighted, as her 'Hey Diddle Diddle' earned her some chocolate, however she gave the medal to me on a little note, when I asked her why she said "because you deserve it Mummy", which was lovely of her.  Ride a Cock horse didn't win anything, there were 9 entries in the category and the winner was outstanding.
My daughter and I decided not to go on the afternoon coach tour around Cotswold villages, so we had a drink and something to eat while we waited for my husband and elder daughter to return from the aircraft museum they were visiting, so they could give us a lift back to the caravan.  We went for a dog walk during the afternoon, then got changed for the evening dinner.  This is when I sprung the new doll surprise on my children, as I had made a dress for the Blond Gingham to match the dress I'd made for my younger daughter to wear at the festival dinner, as well as a lacy cardigan and headband for the doll.  After some discussion they decided our new girl had to be called Miranda after the character from 'The Tempest' which they had seen in Stratford-upon-Avon a couple of years ago.
My girl sat at the children's table and I sat with a lovely group of people at the other side of the room.  We received the first of our table gifts at the meal - a fabulous pair of converse shoes covered in the Union Jack in a little bag, and at our table we also had little bags of Stratford notelets with the Festival details printed on them.  And Dee handed around a bag of colourful hats she had made for us to choose from, so I felt really spoiled.  The after dinner surprise guest speaker was none other than Anna Doggart, the daughter of the owners of the Trendon factory, and she had known Sasha Morgenthaler well and had several studio dolls to show us.  What a lovely way to end a long and interesting day. 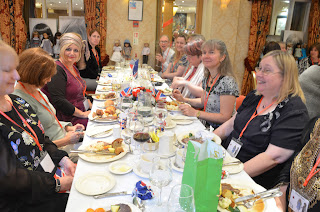 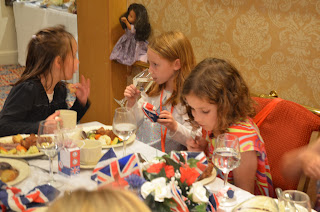 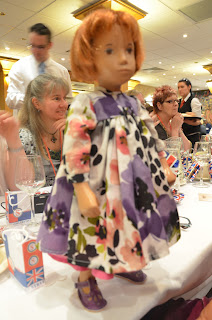 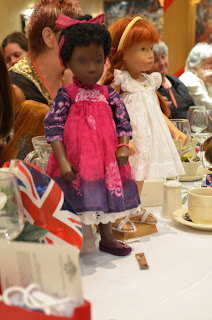 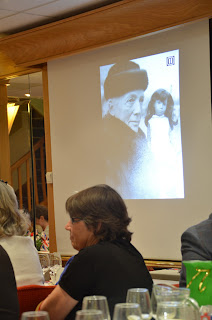 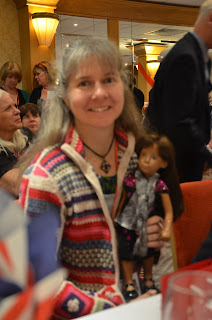 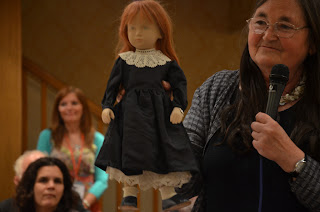 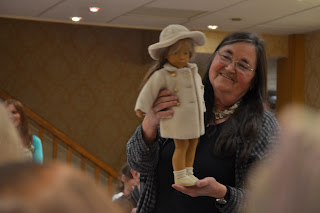 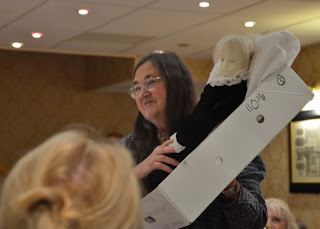 I especially appreciate the pictures from Anna Doggarts talk, as Boo wanted to go to bed at 10:00, which was before she was introduced. I would have forced her to cuddle in my lap if I had known. Nice of little one to share her medal with you. She is such a sweet girl.

Kendall has put some photos of Anna Doggart's talk on her blog at http://kendalssashabrood.wordpress.com/2012/06/28/the-mystery-guest/ and I do have more photos of it, I just didn't post them all up.

I guess Boo was wise - she needed her sleep, my girl didn't have much choice because we weren't staying in the hotel. But it did make a very late night for her.