As soon as my younger daughter got out of school on Thursday afternoon we collected our caravan and drove to Stratford-upon-Avon.  After setting up on our pitch I was keen to get to the festival so we all had a quick bite to eat and set forth with Florence, Nicholas James and baby Mabel.  We got to the hotel soon after 6.30pm and were immediately overwhelmed by the amazing displays in the lobby set up by Rosemarie Shortell and Dawn Law.  After registering (and being welcomed in a very friendly way by Dawn and Rosemarie, which put us nervous newbies at ease) I almost immediately spotted Fran and Boo, whose photos and blog of the 2011 festival had inspired me to attend this year.  It was super to meet them and immediately my little girl, Boo and another child set to playing together while Fran and I chatted.

The meet and greet area was crowded and quite noisy with lots of excited people and their beautiful dolls, I'd never seen so many Sasha and Gregor dolls in one place before, and it was a little overwhelming, but everyone I spoke to was friendly.  The swap meet gift exchange took place in one of the connecting rooms where we were socialising, a table was cleared to take all the gifts and Dawn dished out numbers as we placed gifts on the table.  The rules had been changed from those of previous festivals apparently, so what you unwrapped was what you kept (unless you arranged a private swap later with someone), however because the room was so crowded and a little chaotic, it was hard to see what people were unwrapping, and not everyone waved the item above their head to show it off to everyone.  I was gratified that Heidi Wheeler was pleased with the mint green set I had made, and we received a lovely little short blue jacket made by Mary Jones of www.sashafashions.co.uk, which Florence decided was hers, as it matched her navy flowered dress she was wearing. 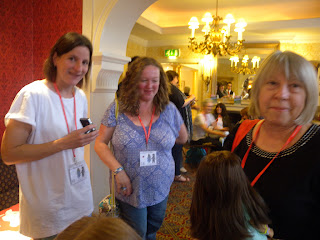 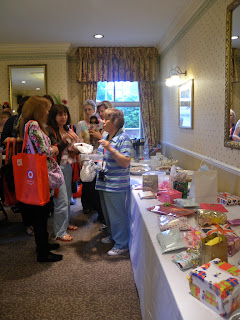 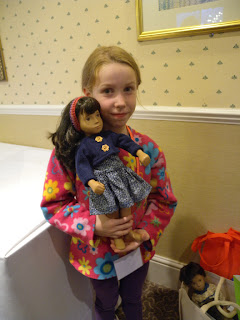 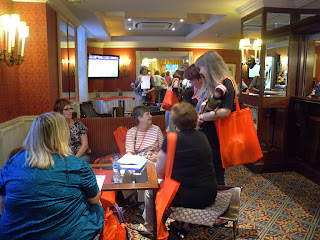 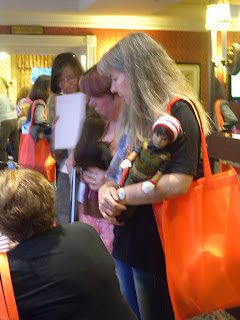 My photos from the evening are a bit blurred, my own camera wasn't coping well with the indoor lighting and my trigger happy finger (I didn't allow the focus to adjust before pushing down the button fully), so the next 3 days I used a much better DSLR borrowed from work.

We have a Sasha from my elder daughters childhood. What a great idea and doll she is. C

Beautiful photos! Thanks for sharing. ;)

Fun to see the festival through the eyes of a first-timer, I can't wait to see/read all of your posts... and I spy a picture of me. :-)