I still haven't had a chance to make Susie, my childhood Roddy doll, any new clothes. However today I raked out the bag of clothes that I had for my childhood dolls (including some I had made) to sort out. Several items (very creased) have gone to wash (in a bag) and will be ironed and repaired where necessary. But one little dress that I bought years ago on a home made dolls clothes stall at a large annual fete was clean and just needed a little ironing, and the shirt I had made to go with it was fine. So Susie had a change of clothes and now looks very fetching in orange and white gingham and white shirt.

One of my early childhood dolls was given to me by my brother, who won her on a tombola stall at a show when I was about four. She has the body of a baby doll (hard plastic) and a vinyl head, and came with long brown hair which seemed a bit odd on a baby body, so she was always treated as a child doll rather than a baby. Unfortunately her eyelashes are mostly missing and her hair inevitably got trimmed but fortunately never had the drastic treatment that poor Susie endured, and is still quite acceptable now, with no missing plugs. I named this doll Amelia-anne after the character Ameliaranne Stiggins (Ameliaranne and the Green Umbrella), as we had several of those books which had been my mother's. I've re-dressed Amelia in a blue gingham dress for these photos, a colour scheme which seems to suit her. Whereas Susie is rather a serious but sweet looking doll, Amelia is unfailingly cheerful and rather cheeky. 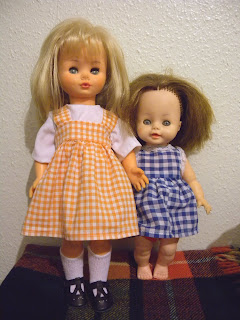 Susie and Amelia in their gingham dresses
It hadn't occurred to me what type of doll Amelia is until this evening, so I checked her over for marks and discovered 'Chiltern dolls' 'Made in England' on the back of her vinyl neck. She must be early 1970s but I haven't found anything quite like her in a quick web search, so have a bit more sleuthing to do. She is 13 - 13 1/2 inches tall, and looks like the 'Debbie' doll face, but with bent legs.

Susie, Amelia-anne and Anna (my Gotz doll) are on display in my bedroom. Occasionally my girls ask if they can play with them, and they always treat them carefully then put them back. At one point Susie spent a few nights on my younger daughter's bed with her Gotz girls. 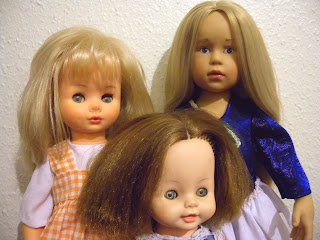 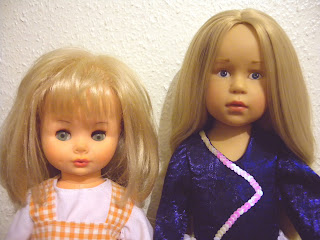 Susie and Anna
(about time Anna changed out of her skating outfit)
Posted by DollMum at 22:57

Nice to see your dolls. My daughter has taken over 'my' Emily doll!
It's great that you still have your childhood dolls. They're looking good. Your Anna is lovely too.

I've got several more childhood dolls that I hope to photograph and blog about in the coming weeks. Also my teddies. And more dollshouses (we've got 3, plus a room box, but unfortunately only 2 are currently on display).