When I was a teenager I was inspired by some tiny peg jointed dolls in a Museum in the town where my aunt still lives. Even though I didn't have the tools or the skills to make really good dolls, I started experimenting with twigs, small pieces of roughly carved wood, and pins. Eventually I succeeded in making a 1/12th scale wooden jointed doll that somehow satisfied me. 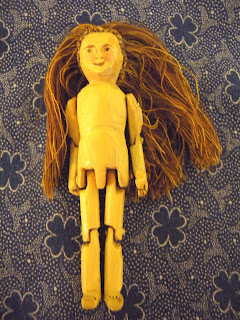 I can't recall how I managed to bore the holes through the main body of the doll for the arms and legs, it may have been with a hand drill (I wasn't brave enough to use an electric drill), but I know my woodcarving tools were pressed into service for the shaping of the bodies, and and glue for the feet. The joints were fixed with steel pins and solder so the doll is definitely not of a safe quality for child play (I did use flux for the solder, but cannot vouch for the joints), and I painted her carefully with gloss paint (which I wouldn't use now, as it gives an unnatural shine). But these were the best materials I had to hand at the time.

I was obsessed with creating hair that looked more natural than the traditional painted topknot, so painstakingly stitched different cotton threads into a small piece of material which I glued to her head. As you can see from the photo I even used different colours in her hair to make it more realistic. Then I had great fun making her white bloomers and miniature smocked dress, with the tiniest print material I could find. I was really proud of this dress, and more than 24 years later I'm still pleased with my teenage efforts. 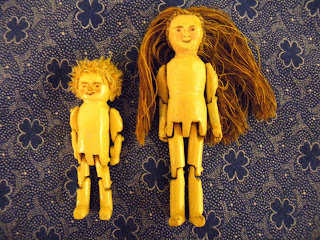 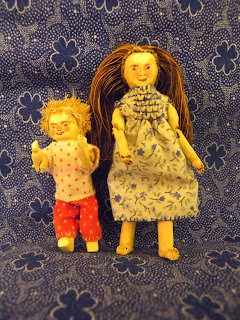 I then made this little doll a younger brother. He has rather a spiky hairstyle, as I didn't want to glue his hair flatter, so he has the appearance of a rather cheeky, naughty little boy. I also sewed his clothes.

Their faces aren't very good - I was still a beginner at that time in painting detail, and some paint has flaked off the side of the girl's face. But they look happy.

These two dolls were my best efforts - although they gained parents and a baby sibling, none of those dolls were anything like as good as these two: the others were rather clunky in style and the joints didn't hold up so well, so I threw them away not so long ago, as they didn't stand the test of time.

About 2 1/2 years ago my elder daughter acquired three Heidi Ott dolls for her dollshouse which we built from a kit. I made clothes for all these dolls, as they had none. The boy wears a knitted sleeveless top over his shirt, and a pair of trousers, all of which I made, and the girl wears a smocked dress. I actually referred to the earlier smocked dress I had created all those years ago to remind myself of what looked effective, and of course wanted to improve as much as possible. All these clothes (even on the wooden dolls) are easy to remove or put on again - the earlier outfits have beads and loops for fastenings, the newer dress has miniature buttons with button holes stitched with blanket stitch. The third Heidi Ott doll is an adult - Mrs Harvey, but more about her in the future. 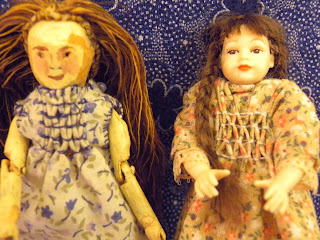 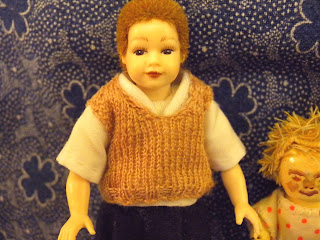 It is interesting to compare the newer dolls and clothes with the handmade dolls. I'm proud of the fact that I got the scale about right and that my wooden dolls have a unique character and charm of their own, even though they are very rough, and definitely cannot stand up to a child playing with them. I like the fine detail in the faces and hands of the Heidi Ott dolls, and their hair, but rather wish that they didn't look so hunched around the shoulder area with their new clothes on. Their bodies are fabric covered wire armature, and the padding is rather too much for their clothes to hang naturally off their shoulders. So the wooden dolls will go back in the doll display cabinet, whilst the Heidi Ott dolls will return to Harveys toy and cake shop (which I'll blog about soon) before my daughter discovers they have been involved in a photo shoot. 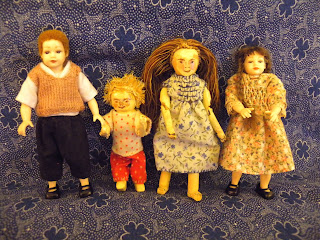 Your dolls are beautiful! Such a lot of skill as a child. I dreamed about making dolls, and made one rag doll, but the others I thought of making with a wire frame and cloth padding never did get made.
These two are lovely heirlooms for your daughters!

I started making things (knitting and sewing mainly) when I was very small, though early attempts at dolls clothes were a real struggle (I remember tears when knitting a purple jumpter for a Sindy that just wouldn't go right). I supposed I could have been put off trying again, but wanted to improve skills so did persist and spent lots of time at home making things when friends were out socialising.

My elder daughter has never been into making things to the same extent (though is a very talented musician and likes drawing), but my younger girl shows signs of crafty dexterity and hopefully I'll have more time to show her how to make things than I had when my elder girl was 5.

I am pleased to discover your dolls!
Thank you for joining my blog!
It is so good to be an adult and feel free to share this passion of dolls.

Hello Papillon Bleu and welcome to my blog. Yes I know exactly what you mean - we adults can share online a love of dolls and miniatures without ridicule.
I was often teased about my dolls beyond the 'expected' age (about 10), and for this reason my blog is anonymous to protect my teen girl from suffering the same torment. I won't publish photos of her with her dolls just in case anyone she knows happens to encounter it online.

Your little handmade dolls are a real treasure! I just discovered Heidi Ott and will probably purchase a couple for my dollhouse. I love to make doll clothes too. I made Barbie clothes for my daughter when she was younger. Can't wait to get started dressing my little dolls.
Thanks for sharing yours. I love your blog!

Thank you Kathi, I'm enjoying discovering the contents of your blog too.

I just chanced upon your blog & marveled at your talent in wood carving as a young girl. So envious of your ability; I'm all thumbs & would have ended up in the emergency room. The dolls you maaded and the clothing you fashioned for the Heidi ott dolls are heirlooms for your two daughters.

Thank you for your kind comments - I am still trying to improve my handmade skills.