I've been away caravanning with the family and the dolls! Back in May I made sleeping bags for the 4 Gotz dolls owned by the girls when we went caravanning, and these were very popular with both of them, and were also a good way to transport the dolls in the long car journey - they were slipped into their bags which protected them and their clothes and made them easy to grab and carry into the caravan. 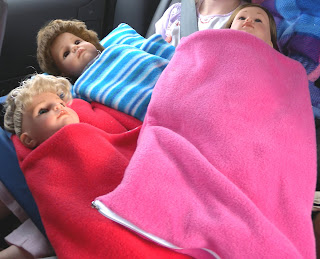 Jayne, Peter and Harriet all comfy in their fleecy sleeping bags,
which have proper zippers
This time however I thought we might not take them, as we were taking my cousin's two children (boy and girl) with us, so space was at a premium. However not only did we take the four, but also my cousin's daughter decided to bring her three, and suddenly the caravan was overrun with 7 dolls besides all the humans (and the family dog!). For the purposes of sanity preservation, the dog slept in the awning for the whole 6 days (especially as he is danger to anything precious that is chewable).

Fortunately the two elder children decided that the 2 berth tent in the awning was the best option for their sleeping arrangements, so the table and seats which convert into a bunk could remain as a useful table - and ice rink! Because Dancing on Ice competitions was what the 2 younger children did all week with the dolls (thank goodness the table surface was scratch resistant). I didn't have time to take photos of this event, but inbetween cooking and co-ordinating 6 people, it was fascinating to eavesdrop on their competitions and the interaction between the two girls (aged 7 and 5). I've noticed that the doll play of my younger child has definitely developed and moved on since she acquired her first play (rather than baby) doll at Christmas. At first all she did was change the doll's clothes and perhaps have short conversations with the doll, but now the dolls 'talk' to each other or she holds slightly longer conversations with a doll, and storylines are starting to emerge, usually centred around the current event of the time (like getting dressed for something, preparing to go somewhere or treating a doll with a sore tummy).

Just before we went away, my elder daughter spent a whole evening quietly enjoying the Harriet and Peter dolls, and the horse! She has decided that the horse is Peter's, as the boy doll looks so smart in the dressage outfit. In fact she was the one to suggest that the dolls come caravanning with us again. She had just spent two weeks at 2 different camps with lots of other teens, and I commented that it was interesting seeing her playing with the dolls, to which she replied that she didn't often get the opportunity (term time is so busy). I think she was really appreciating having a chance to chill out on her own without all the socialising she had done in camp (both of which she enjoyed) and doll play was an undemanding, relaxing pastime. By the sounds of it there will be a certain amount of collaborative doll play this week during the holidays, and she has placed an order for Girlguide/Rainbow uniforms for the dolls to help celebrate the Centenary year! Help - it looks like I'll have to get the sewing machine going again soon.
Posted by DollMum at 23:44

The sleeping bags are a good idea, and seven dolls is a lot. Lucky girls to be able to go with their cousins.
It is always so interesting seeing how the dolls are played with.