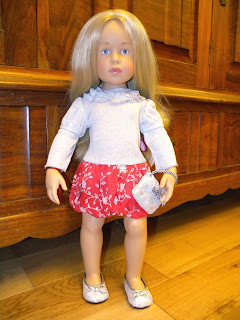 Anna in her new Gotz dress
This morning my younger daughter wanted to change my Anna doll into party clothes, and we realised that Anna's own wardrobe consisted of her original outfit with the lovely suede boots, a skirt and the navy party dress I had made, her ice skating dress and silver skates, but no party shoes - she had borrowed black boots from one of the other dolls at Christmas for the party dress photo. So I decided to give her a present which had been hidden away since I had bought some of the 2009 catalogue clothes earlier this year for my girls dolls. This was the only item still not brought out from that secret stash of clothes and I had always intended it for the Anna doll.

It is a lovely silvery dress with red and white patterned rouched skirt, matching silver shoes and handbag. However after putting the dress on, my daughter decided the other party dress had to go on first for a dance before this new dress could be worn for a picnic, so off came the dress again. However the long velcro strip down the back kept catching the inside of the dress, and in taking it off, the top of the dress was damaged on either side (and I was being careful). 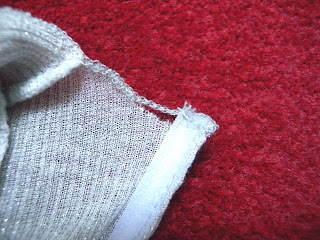 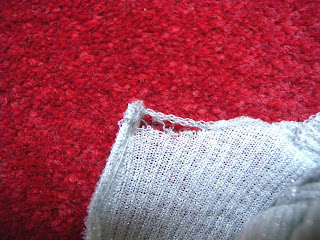 I also noticed that the little handbag was vastened with velcro, but the tabs didn't line up well, and the bag was closing in a distorted fashion, and the flap was gaping badly. Additionally, the velcro was catching on the silver threads in the material. 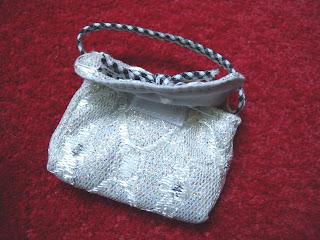 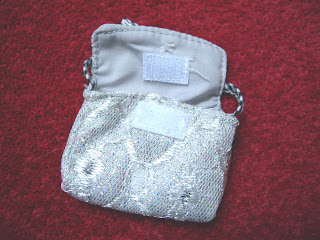 I was really disappointed and annoyed about this - nasty velcro once again was causing problems for the clothes, resulting in destruction.

There was only one solution, and I acted immediately. Out came needle and silver thread (rather stiff stuff to use for sewing) and I used careful blanket stitches to repair the damaged dress. Later in the evening I sewed press studs (silver rather than black) on the handbag and removed both strips of velcro so the bag now closes properly and I've pulled the slight natural distortion straight again. 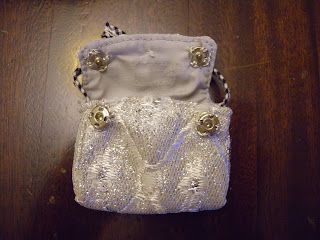 The little handbag with press studs, without velcro 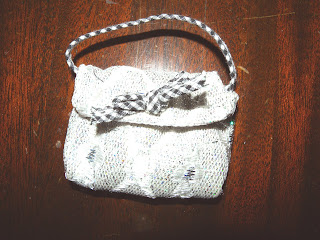 In the afternoon three of the dolls joined my young daughter for a picnic tea party in her bedroom. Samantha was dressed for ballet, Jayne was dressed in some of Samantha's original skating outfit and Anna came in her new party dress. 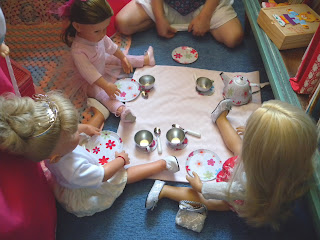 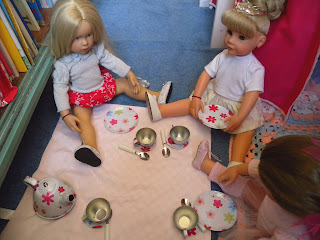 The ruched skirt is kept in place by a white band stitched on the inside of the skirt which makes the skirt narrower than it looks, so this meant getting her to sit could only be done by pulling the skirt up a bit. But despite this annoyance, and the irritation of having to do repairs and adjustments to a new bought outfit, it is still a lovely dress, shoes and bag set.
Posted by DollMum at 00:44

I must point out that my cousin's mother in law has always liked the quality of the Gotz clothes, but I think she would be disappointed in how easily this dress got damaged because of the fastener used.

I like the fact that the Australian Girl Doll creator Helen Schofield has made a conscious decision not to use velcro on her dolls clothes wherever possible, even though it supposedly makes it easier for a child to change the clothes.

Learning to cope with various clothes fastenings is part of child development (there are dolls that teach all the different fastenings - my girls have a large clown for this!). I know velcro is probably easier and cheaper for a manufacturer (though personally I dislike using it when sewing), I just wish Gotz wouldn't use it quite so much.

Hi,
Found your blog from link on another blog. Anyway, I love it and will be back to visit again. Long story....but I am going through my 2nd childhoodO now that I am over 50). I always wanted a dollhouse and just bought 2. One is a tin Marx from 1960's that I just need to find furniture for and the other is an old wooden one that someone built and I am restoring...........slowly. I also recently have gotten interested in dolls......so I will surely be checking your blog for ideas!

Hi Cindy, thanks for the compliment. I can identify with the 'slowly' as this is how it has been for me and my Westville house which I will blog about in due course once I've got it out of storage. Anyway, welcome to my blog.

Velcro really isn't nice on doll clothes.
I haven't come across small zippers so far here. Thanks for the link to the Tiny Zippers site. We enjoyed looking at the Barbie scenes there too.