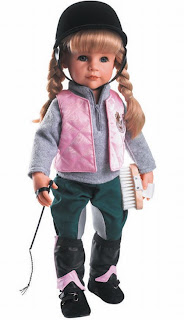 My cousin gave her daughter the Gotz Horseriding Sarah doll set for her birthday. The 2008 stock were retailing in TKMaxx for £29.95 which was a bargain compared to the usual price of around £60.00. The new doll was named Lacey (from the Barbie film of the 12 dancing princesses) and was soon changed out of her general riding outfit into a new AG doll dress bought via ebay. However getting the grey fleece top off the doll was difficult (I did it in the end) as the top had a zip that only goes half way down from the neck, and no other opening to help get the top over the head. The Gotz dolls do not have bending arms and the thumbs got caught in her braided hair when my cousin attempted to get the top back on the doll later.

We agreed a plan - I have some small separating zippers I had bought for making zippered fleece jackets for my girls dolls, so I brought the top home with me and inserted the new zipper, making it into a jacket. I didn't have a grey zipper, it had to be white, but I think this looks fine with the grey.

It is a shame that Gotz designed this top to be difficult - I'm sure it wasn't intentional and I wonder how many little girls have had problems with it. On many of the Gotz outfits they have used velcro fastening, but this is awful especially when it is a skating dress (the special edition pink dress in particular) in combination with the fine tights - the velcro rips the tights if you aren't careful, and when it is a child dressing the doll, the tights have no chance! I notice that the new Australian Girl doll outfits are made with as little velcro as possible, and I certainly avoid using velcro fastenings for the doll clothes I make - buttons or snap fasteners do the job fine. I guess that the velcro is easy and cheaper to fit though when you are mass producing doll outfits in a factory. 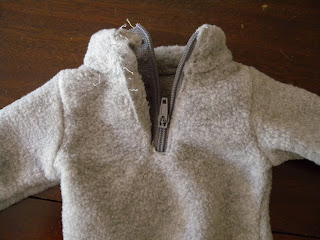 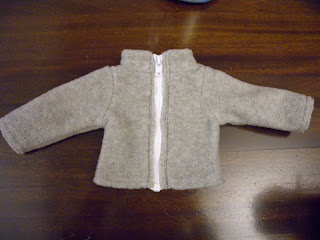 The new zipper in place - I stitched it by hand then by machine. 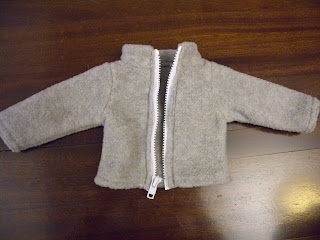 Separating the zipper, turning the top into a jacket.
Posted by DollMum at 21:52

What a good idea. Velco is a bit nasty. I must find some small open ended zips.

I bought the zippers from the USA - try http://www.tinyzippers.com/dolljacketzippers.html as I couldn't source any that were small enough more locally.