Beside Matilda and Judith on the middle shelf is my comic Germanic band set. These little characters were given to me by an elderly German woman who was slowly dying of cancer in her spine, and we used to visit her after Church on Sundays as she was bedridden and could no longer get to the service. She had all kinds of curiosities on display in a cabinet in her bedroom and they were a good distraction for two little girls while our parents were talking with her. She always took an interest in which dolls or toys we had brought with us (more about that in a future blog, as she named some dolls for me) and was unfailingly kind, despite the pain she was in. We loved this little band, and she must have remembered that because after she died this little set was presented to us and eventually became mine.

Unfortunately the paint is flaking off in places in the 30 years or so that I have had these little figures and the guitar player's arm has broken so is held on badly with glue. The labels on the underside of their bases are in English, but they are in German style costumes, so I can only assume they were made for English tourists visiting Germany, Austria or Switzerland perhaps. They are wooden, but with springs for their necks which means their heads can wobble (I don't attempt this now, but we did when we were children) and their expressions are so entertaining. I think this little band is quite a hilarious combination - on the one hand there is the smart conductor and cellist, but the remaining players are playing folk type instruments and are wearing national costume not concert dress. 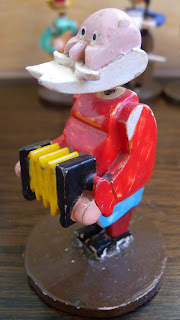 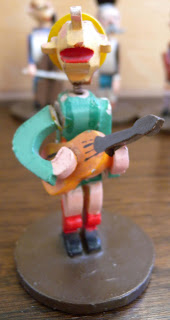 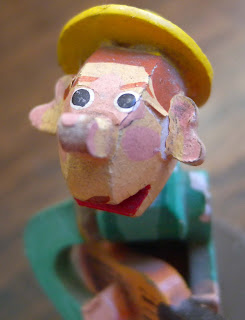 Guitar player from above 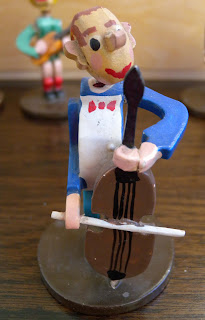 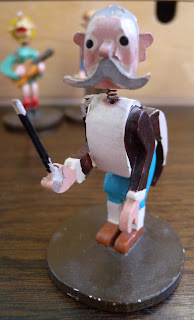 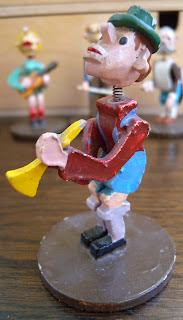 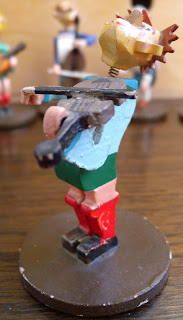 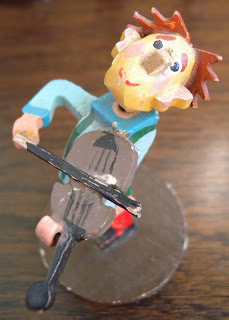 Violin player from above

If you can put a name to these figures, or tell me where they came from, I'd be really pleased.

The label on their bases says 'fine quality woodcraft handmade'.
Posted by DollMum at 23:28

They are gorgeous! I love their expressions. They are clearly having a great time.
I love reading the memories associated with your dolls. Then they are not just nice objects, but part of your life story and the other people involved with them, and I can picture something of the doll's life as well as the people's lives! Thankyou.

I'm enjoying writing about them. Dredging up the old memories about my dolls and curiosities is quite cathartic and what is also nice is watching my daughters and their interest in their dolls.