The next character on the bottom shelf of my display cabinet is a little plastic boy costume doll in his green lederhosen, red tie, leg warmers and rucksack. He also has a cheerful green hat with a feather, so is probably meant to represent the same region as the bigger girl with a green hat.

Beside him is a rather sinister looking little girl. Her eyes are sunken into her severely painted face, and her clothes are also quite dark, so she is rather spooky. I can't recall where I picked her up from, probably another market stall. Her mohair wig is glued on rather badly. 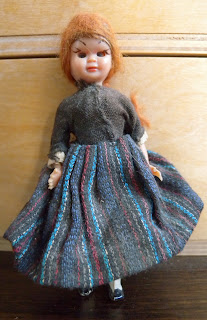 The bigger costume girl beside her was bought for me from an antique shop by the same aunt who had sent me the American/Canadian Indian boy several years before. This was because while we were browsing, I couldn't put the doll down, so she decided to buy her for me. I named the doll Anastasia because she looked sort of Russian to me, and at the time I was reading about Anna Anderson by Peter Kurth. 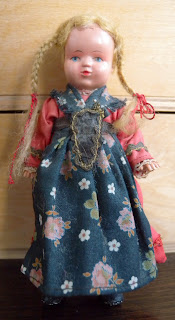 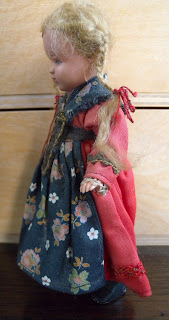 Joy stands quietly in the corner. She is the same size as a Pippa doll, but is earlier and has rubbery bendy legs. She came with a single record and a special stand that fixed on the centre of the record when revolving on the record player, so making her appear to dance to the music. She is actually my sister's doll. The stand and record are long since lost, but amazingly Joy still has her original clothes, although has worn various Pippa doll clothes. The back of her head has been glued where the vinyl eventually split, her long sweeping beautiful blonde hair has been cut very badly and the rest of her body has been quite punished by small girl rough play. Poor Joy was one of our earliest dolls, and the scars she bore served to remind us to treat our subsequent dolls with more care. I could never bring myself to throw her away, I think she deserves a gentle peaceful retirement and I always liked her face. 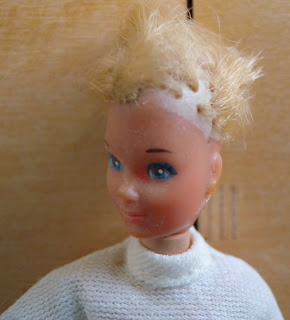 Beside Joy is a doll I picked up on a market stall for a pound. She is a Dear Judy doll and is still in her original packaging. I decided to keep her this way, so she has never been played with and is rather scantily dressed in a bikini.

In front of all the dolls on the bottom shelf is:

my collection of frogs (a family of six) and two dragons, 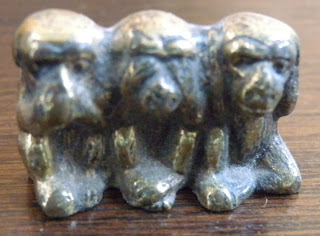 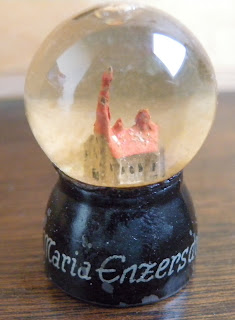 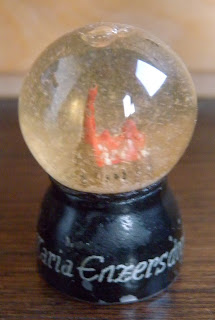 This little snowy scene belonged to the person who tested my for my Brownie Flower Arranger badge. I had to telephone to make the appointment (terrifying - I still dislike making phone calls to strangers), cycle to her house with all my flowers, do the arrangements in vases on her table, have my test card signed and then take everything back home again! While I was there I spotted the little snow globe in her display cabinet. I thought it was wonderful and said so. I was amazed when she gave it to me (didn't know the flower arrangements were that good!). I still find this whole experience surprising as nowadays for child protection reasons Brownie badges would never be judged by a Brownie visiting a private house (even if the judge was CRB checked, in those days the testers were approved), and the fact that it also resulted in me receiving an unexpected gift from the tester would also not be considered advisable or ethical in these Politically Correct times. But that was a different era in so many ways. The little snow globe reminds me that being brave enough to speak out in admiration for something can sometimes result in unexpected rewards. For a shy child this was a particularly nice way to learn to be a little bolder.
Posted by DollMum at 20:36

I just love your dolls and I have really enjoyed your doll cabinet posts.....it has been fun to go shelf by shelf.

What a lovely story about the snow globe. Yes, things are so different now, aren't they?
We had a doll who danced on a record, too! I don't think we kept her for very long, though - I certainly don't have a very clear memory of her.
The spooky doll probably has a very interesting story! If she lived in a dolls house, I wonder what kind it would be?

Probably the spooky doll's home would have been something like the Addams family house!