On Thurday our cocker spaniel got upstairs because one of us left the gate open.  We were out of the house at the time, so unfortunately he wreaked havoc with my precious aged bears and Poodle, who were sitting up in the bedroom.  Poor Panda has a couple of puncture marks in his body which I haven't yet repaired, Bruin's coat protected him and he is unscathed, but poor Poodle well and truly had a fight with our naughty destructive live dog.

My husband found his ears and body on our bedroom floor, but his tail and foot were in the dog's bed downstairs.  I came home at the end of the day to this very sorry sight. 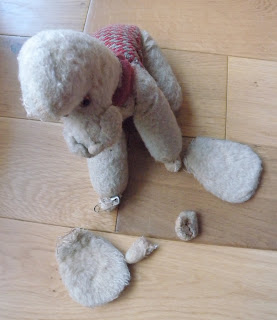 My poor injured Poodle, before surgery 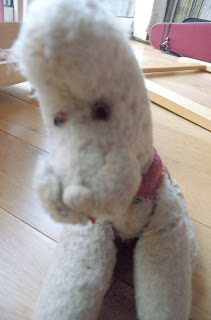 Poodle without his ears 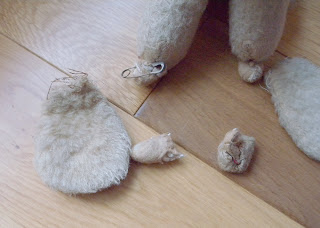 Ears, foot and tail
Fortunately the dog didn't actually do major damage to Poodle's body and head, although there was a gash under where his ear had been, and a puncture mark in his front leg.  Poodle's paws had already been very loose (two held on with safety pins), and his body stitching wasn't great (I'd done a rough repair as a child with rather thick thread).  So his disaster was a real incentive to do what I had meant to do for a while but hadn't prioritised - a proper repair.

Today my younger daugher has had lots of fun playing with the Gotz, Aussie, Euro & Palitoy dolls, changing clothes and arranging them for various imaginary holiday journeys.  Her big sister went to Guide holiday on Friday evening for the weekend, so this was our chance to do things that 6 year old girls like without big sister around either being pleasant or horrible to her, which has happened a lot recently (no one can really predict the mood of a young teen, and little sisters can be very irritating to 13 year olds sometimes, so although they do often play nicely, the atmosphere can change almost without warning).  After my 6 year old had gone to bed (having taken all the dolls back upstairs again) my husband and I brought the (live) dog into the living room and I got my sewing thread and some beige felt and started to repair Poodle while we watched a DVD together.  It was one I had seen before but my husband did not know and was a real laugh (and very appropriate considering my repair work) ... "The Truth about Cats and Dogs"!

Here is Poodle at the end of the evening.  I think you will agree that he looks much better than he did even before he got mauled, as he has completely renewed paws (I actually sewed the old paws inside new felt, then stitched them back on) and his tail has perked up again.  If you think he looks a little wary but fully on his guard, this is because the live dog was only a few feet away (although asleep) when I took these photos! 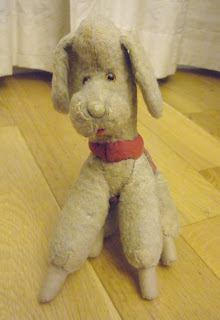 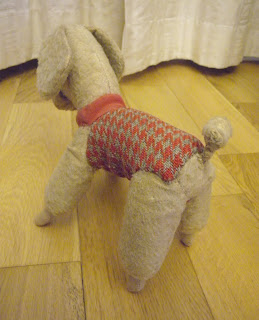 His tail stands up again! 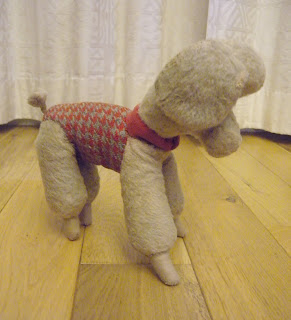 Ready to run just in case of another dog attack 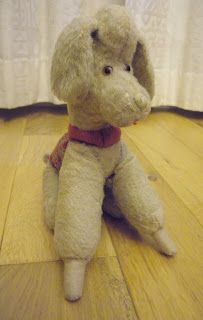 Poodle sitting but on the alert
Posted by DollMum at 23:57

Poodle looks perfect. Great that you were able to rescue him - he is lovely.

Oh how dreadful - I'm really glad that the damage wasn't much worse. And Poodle does look very spiffy now - congratulations on your excellent repairs :-)

I'm so glad Poodle is well again. He still looked so sweet without his ears though! I just have a soft spot in my heart for poodles-- my Hagrid is half standard poodle!
hugs,
Jill