I'm sure I'm not the first doll collector to think that ebay is dangerous.  I've been looking at Sasha dolls on various sites including ebay for a while.  But had always resisted buying one, though I'm not sure why.  I suppose one of the reasons is that our girls have a large Gotz family now, and adding Sasha dolls to the collection seemed crazy, especially as Sasha dolls are so sought after and often sell for a lot of cash. I saw a Sasha doll a long time ago in a museum but haven't seen one 'face to face' since then.

I love the naturalism of the modern Gotz play doll faces so they seemed good compensation for not having a Sasha doll (of the Trendon or Gotz vintages).  But it didn't stop me being intrigued and eventually in early September I saw a Sasha baby (early 1970s, girl with dark hair) which no one else had bid on and which appealed to me.  I was the only bidder (at the last minute) and won her. 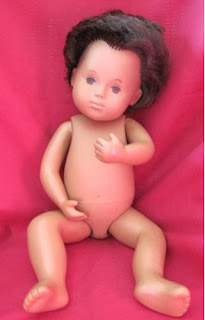 Mabel's ebay photo
A few days later she arrived.  I knew the Sasha babies were small, but was struck by her smallness and slimness, especially compared to modern baby dolls which always seem so chunky and over proportioned. She nestles very nicely in a child's arms and I can see why Sasha Morgenthaler designed her that way.

Baby Mabel came with no clothes (or box) and she was a little grubby, though didn't smell bad.  Her elastic is very slightly loose but she still poses well.  Someone had taken a small chunk out of her fringe once but fortunately not right down to the roots.  I carefully washed her, taking care to not allow any water into her body (using a cotton wipe damped with warm water and the mildest shower gel - Simple range) and carefully washed her hair.  One or two hairs did drop (I was expecting this as some dark haired Sasha dolls have this tendency). Her face paint is fine.

One small yellow knitted jumper we had for another doll fitted Mabel and I knitted her a pair of knickers (she still has no nappy).  I sent off for a pattern which I knitted in 4 ply rather than DK and with smaller needles (it was meant for a 12" baby doll which was a little chunkier than the Sasha baby) and have knitted her an all in one sleep-suit with hood.

A couple of weeks later I saw a dark haired Sasha girl on ebay which appealed to me.  It is funny how many of them I could happily look at and continue the search, but on seeing this particular girl I knew I had to try and purchase her.  It was a long week of watching.  At the last minute another bidder made a bid, but I held my nerve, kept my budget firmly in mind and won her. 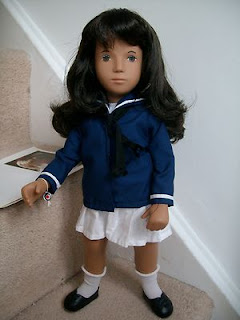 Florence's ebay photo
Florence arrived in record time and in beautiful condition.  She had only ever been displayed, so although lacked her box, did come with her leaflet and with her clothes still perfect.  Her hair is glorious - glossy and with the factory curl.  She was the first full sized Sasha girl I had ever held and is a 1980 Sasha Marina.  I bought a pattern for a bolero cardigan (grandmas_patterns) and knitted this for her in fuchsia pink with the picot edges worked in hand spun wool I've had for a long time (from a small collection I'd brought from a South African farm about 25 years ago). 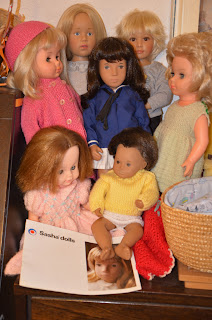 Mabel and Florence join Amelia (Chiltern), Susie (Petalskin Palitoy), Anna (Gotz),
Jakob (Kids N Katz) and Doreen (Petalskin Palitoy) in my doll display
A brown haired boy was next on the wanted list.  Although I like the blond Gregor boys, a dark haired boy was preferred by all the doll collectors in this household, so I kept watching.  A few weeks later a 'buy it now' I'd had my eye on lowered the buy it now price and also gave an option to make an offer, so I offered and it was accepted.  My Gregor came with his box, leaflet and even his football - he is the footballer from the mid 1970s.  I don't think he had even been displayed and is in super condition.  Although all three Sasha dolls are mine, the girls had a hand in their naming (referring to our baby names book!) and we settled for Nicholas James (which was the name my sister would have had if she had been a boy).  He is James for short though. 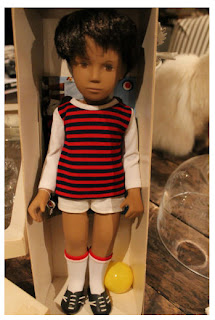 Nicholas James's ebay photo
A pattern book for baby dolls from 12" - 22" yielded a simple sweater pattern which I adapted (it had shoulder buttons, so I made a back opening instead).  I used two different colours from my collection of hand spun wool.  I'm quite pleased with the results. 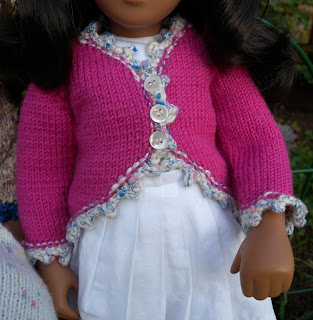 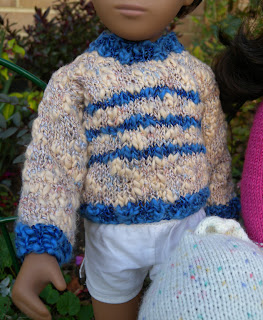 Nicholas James in his sweater 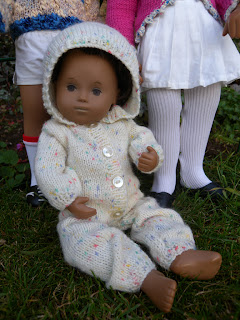 Mabel wears her sleep-suit
No more doll collecting for me this year - my doll budget is used up for the time being and my lovely Sasha family looks great and is providing a lot of entertainment.  Almost every night at bedtime when I read a story to my younger daughter she asks for one or other of the Sasha's to hold and play with while she listens. Florence has even been to the theatre and to a concert cradled in my daughter's arms. 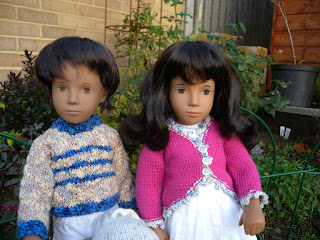 Comparing their eyes - NJ has softer brown eyes than Florence 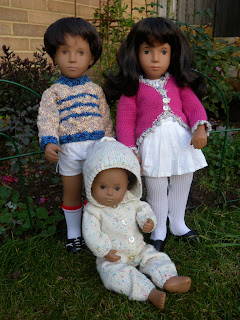 Nicholas James, Mabel and Florence in our garden in their new knitwear
Posted by DollMum at 23:43

What a lovely Sasha family you have! I like them too, but they are a bit out of my price range. Their new clothes are very sweet. I wish I knew how to knit.
Congrats on your three new kids!

A very sweet and gorgeous Sasha family who look so lovely in their new knitwear.

Thanks for the praise re my knitting.

Bama, I'm not sure Sasha's are in my price range either, however I got lucky I think (I'd been comparing prices and described condition of various dolls on ebay and Sasha sites for weeks to get a good idea of values and worth before making purchases). I've no intention of selling them so wanted ones that really appealed to me, and set myself a firm budget each time. And as a result of buying these 3 there will be no more doll spending for me in the foreseeable future!

I too have held off on the Sasha's--I think I would be hard pressed not to bid on the baby too though! I have never seen a Sasha Baby--she is too cute--as are the others and all so well dressed!

Congrats on your lovely new Sasha family, they are all adorable