It has been another very busy week, especially with the lead up to Christmas: the children and myself involved in seasonal music making and the great card signing exercise before the postal deadline. However at last I have been able to return to the sewing machine for the next part of the countdown - to make Barbie doll clothes for my younger daughter's friend.

A few weeks ago I bought Burda pattern 8576, which features a variety of different outfits for Barbies and Ken dolls. On Wednesday evening I cut out most of the pieces and ironed out the folds.

I made a start on the long dress on Thursday night, but then found that despite cutting to the pattern, the doll's backside was too big to allow the dress to meet properly at the back! This was very frustrating as I had done quite a lot to the dress but was also struggling with the material, which is very slippery and would slide sideways in the sewing machine. So I recut the dress to allow for an additional seam allowance (these had been included in the pattern, so don't know why it didn't work first time, maybe it was meant to be for stretch material.) 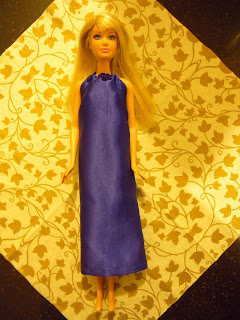 The simple evening dress which took so long to make

Ironing the dress was also tricky once I had sewn the back seam, as it needed a cool iron for the fabric, but I also needed to get the centre front crease out. I ended up rolling up a tube of white felt and stuffing it up the dress, then ironing it bit by bit. This worked well. The dress is simple, it has a slit up the back of the skirt, a slit at the back for the fastening (I used a press stud, not horrible velcro as suggested) and a ribbon looped through the front top which pulls the top of the dress to a simple gather, tying the ribbon behind the neck. I sewed the ribbon in place at the centre front and hid the stitching with a decoration.

The dress seemed to take ages to make, but was worth the effort (my elder girl saw it and was impressed).

The jeans took about 30 minutes to make from cutting to finishing - they were incredibly quick, simple and effective to make. They have fold up bottoms, turning them into crop jeans.

The little top took a bit longer than the jeans. I cut two identical pieces of the material, sewed them together around the side and bottom edges then turned them the right side out, and sewed down the top folded over to the back. I trimmed it with green ribbon which doubled up as the shoulder straps which attach at the back. This little top is also fastened with a press stud. 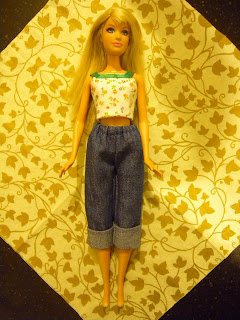 The jeans and top

I shall be making these outfits again for my cousin's daughter.
Posted by DollMum at 23:52

The evening dress turned out well. I specially love the colour. The top and jeans combo looks really good.

Christmas wishes to you and all the best for 2010.

many thanks Pandora, I've spent the latter half of the evening sewing - once again the slippy evening dress (same material), the crop trousers and a jumper top. Last night I sewed a pair of shorts and a top. Must go to bed now!

So fun to see this post. I can remember opening up the box of hand-made Barbie clothes every Christmas. None of my friends understood why I liked the handmade ones better than the store bought, which everyone had (okay, full disclosure-- I liked those too.) One year my mother made a "Greek Princess" outfit way before Mattel had figured out the appeal of ethnic Barbies. I still have that dress hanging on my wall.