It has been such a busy week since my previous update, and I've had little time for miniatures (though have been reading other blogs late at night when I should really go to bed!).  However I had left the paints out from last weekend's efforts because there was one white metal miniature from the toy set that needed some additional preparation work before I could paint it.  The jointed teddy came with only 3 of his 4 pins as one had broken off, and I wasn't willing to trust white metal cast pins anyway.  So my husband chopped them off and drilled holes through his body and suggested fuse wire would be the best material for adding on his jointed legs so they can still move.  He found an ancient card of three different thicknesses of fuse wire, and I chose the middle thickness, so he drilled the holes accordingly.  I am a dab hand with the pillar drill, but as he was available, I asked him to do the drilling.

To paint the bear I threaded the four limbs onto a bent out paperclip I had been using to stir the Humbrol paint, and threaded the body onto the fuse wire.  This way I didn't have the problem of trying to hold a tiny bear and paint him, so my fingers didn't get quite so messy, and it also meant he could dry without touching anything and smearing the paint.

The photos show that the bear is still work in progress, as I've really only given him 2 coats of yellow paint, and want to follow this up with brown detail for the fur and his features, but have had such a busy weekend with church fundraising activities and taking the girls skating, so teddy has to wait until I can spare a little time one weekday evening. 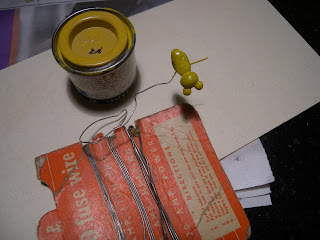 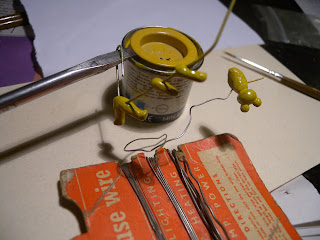 Have you finished you bear Doll Mum?
Thank you for your visit it was nice to read your comments by the way!
Aliénore and Rosie say hi!

No, the bear is not finished because it has been another completely hectic week, and I'm even behind with writing Christmas cards this year (so the overseas ones will be late). I'm hoping to have a go at the bear tonight.
I've also got plans to photograph the rag dolls we've got very soon, just need to tidy the house first... (great way to use a Sunday afternoon!)